Bolton Valley is a mid-sized ski area in the town of Bolton in Chittenden County, Vermont, United States. It is located in close proximity to Burlington, the largest city in the state of Vermont.

The resort was founded in 1966 by Ralph DesLauriers and his father. Bolton thrived for many years as a family-friendly resort and spawned two famous skiers, Rob and Eric DesLauriers, who went on to star in dozens of ski movies. With their brother Adam, they founded Straight Up Films; Adam remains in the area with a more recent venture, Beech Seal Media, named for a ski trail at the resort and a unique type of communication in Vermont lore.

In 1971 Chateau des Monts, a 20 unit hotel condominium complex was completed next to the base lodge (later connected) by Charles P Jones and Land Development Incorporated.

Beginning around 1997, the resort has been under the control of a handful of new owners and struggled with financial viability. However, it has stabilized under the leadership of industry veteran Bob Fries and seen steady improvement in the 2003-2004, 2004–2005, and 2005-2006 seasons, although just before the 2007-2008 season his shares in the company were bought by two locals, and Bolton Valley is now completely locally owned.

As of the Spring of 2017 the original owner Ralph DesLauriers and a small group of investors have purchased the mountain back from Red Stone Properties. Ralph, along with his children are now operating Bolton once again.

Bolton Valley has 2 quads, 3 doubles and 1 surface lift. Ski and Snowboard Rentals and Lessons are readily available in the base lodge. There are also After School Programs which provide the students of participating schools very low rates.

Bolton Valley has 12 trails that are also open for night skiing.

Bolton Valley is one of the few westward facing ski areas in Vermont. 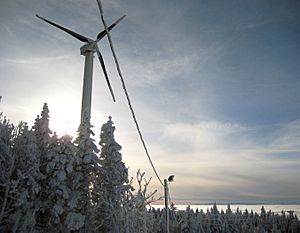 In 2009, Bolton Valley installed a Northwind 100 wind turbine, which was made by Northern Power Systems. The turbine was projected to produce 300,000 kilowatt hours of electricity. It is located near the top of the Vista Quad chairlift.

All content from Kiddle encyclopedia articles (including the article images and facts) can be freely used under Attribution-ShareAlike license, unless stated otherwise. Cite this article:
Bolton Valley Facts for Kids. Kiddle Encyclopedia.