Mount Mansfield is the highest mountain in Vermont with a summit that peaks at 4,395 feet (1,340 m) above sea level. The summit is located within the town of Underhill in Chittenden County; the ridgeline, including some secondary peaks, extends into the town of Stowe in Lamoille County, and the mountain's flanks also reach into the town of Cambridge.

Mount Mansfield is one of three spots in Vermont where true alpine tundra survives from the Ice Ages. A few acres exist on Camel's Hump and Mount Abraham nearby and to the south, but Mount Mansfield's summit still holds about 200 acres (81 ha). In 1980, the Mount Mansfield Natural Area was designated as a National Natural Landmark by the National Park Service.

Located in Mount Mansfield State Forest, the mountain is used for various recreational and commercial purposes. "The Nose" is home to transmitter towers for a number of regional radio and TV stations. There are many hiking trails, including the Long Trail, which traverses the main ridgeline. In addition, the east flank of the mountain is used by the Stowe Mountain Resort for winter skiing. A popular tourist activity is to take the toll road (about 4 miles (6.4 km), steep, mostly unpaved, with several hairpin turns) from the Stowe Base Lodge to "The Nose" and hike along the ridge to "The Chin."

The dominant bedrock of Mt. Mansfield is a mica-albite-quartz schist common to the Green Mountains. Layers of quartzite are found locally. The soils, mostly podzol, are stony with fine-earth fractions grading through textures of fine sandy loam, loam and silt loam; they are mapped mostly as Londonderry, Lyman, Peru and Tunbridge series with considerable areas of Rock Outcrop around the summit.

It has previously been claimed that the name comes from the dissolved town of Mansfield, Vermont, in which the mountain was located, because it was common for settlers to name Vermont towns for their previous homes; several of the original grantees were from Mansfield, CT, which in turn is known to have been named for Moses Mansfield, one of the chief landowners there. However, the town called Mansfield in Connecticut didn’t come to be known as such until 1774. That’s 11 years after Benning Wentworth, the governor of the British colony of New Hampshire, issued a charter to a group of grantees in what he dubbed the town of Mansfield, Vt. It's reasonable to conclude that the mountain and town alike were named for a chief justice of England, Lord Mansfield. Wentworth had good reason to honor Lord Mansfield by naming the town after him. Mansfield and another English official had jointly ruled in 1752 that the land between the Connecticut River and Lake Champlain should be considered part of the Wentworth-governed royal province of New Hampshire, and not of New York, which also claimed that territory. (Its territory was later divided between the towns of Underhill and Stowe.)The Town of Mansfield was platted before anyone involved had visited the site; when it was surveyed, it was discovered to be mostly mountainside. Although a few hardy pioneers settled in the town's few lowlands, the town was dissolved by degrees, with the portion generally west of the mountain being annexed to Underhill in 1839, the eastern portion to Stowe in 1848 after a vote of the citizenry. The dividing line did not run exactly along the ridge of the mountain; thus, the Chin is in Underhill and the Nose in Stowe. Prior to the mid-eighteenth century, the mountain was known by its Abenaki name, Mozodepowadso, which translates to Moosehead Mountain.

The ridge which forms the "head" of the "man" is aligned generally north and south. The "Adam's apple" is on the north end of the ridge, and the "forehead" to the south. From north of the mountain, looking south, this ridge appears as a triangular peak. At the northeastern portion of the mountain, there are cliffs. At the base of these cliffs (on the western side of the Notch Road, Vermont Route 108), there is a honeycomb network of talus caves. There are cliffs on the eastern side of the Notch Road as well. These two sets of facing cliffs are separated by 3 yards (2.7 m) at their base.

Along with other expert trails, a group of trails, known as the "Front Four", are Goat, Starr, National and Liftline. They have steep pitches, many natural hazards (rocks and trees), and little grooming. There are also cross country ski trails around the base of the mountain and on its lower slopes. The Bruce Trail descends the east side of the mountain while the Teardrop Trail descends west side. In addition to Stowe Mountain resort, Skiing is also available at the nearby Smugglers' Notch Resort. 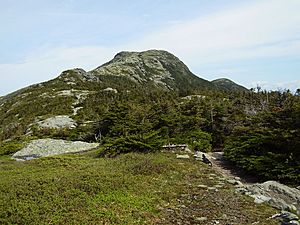 360-degree panorama from the top of Mount Mansfield

The climate is continental subarctic (Köppen: Dfc) observed on maps only in high resolution, although a few meters below the summit is a warm-summer humid continental climate (Dfb).

Summer days on the mountain are mild coupled with cool nights, while winters are long, cold and snowy, lasting from November through April and with annual snowfall averaging 223 in (5.7 m). The highest daily snowfall recorded was 28 in (71 cm) and occurred on March 15, 2017. The highest snow depth recorded was 149 in (3.8 m) and occurred on April 2 during the very snowy winter of 1969. According to the NOAA, snowfall has been recorded on the summit for every month of the year.

All content from Kiddle encyclopedia articles (including the article images and facts) can be freely used under Attribution-ShareAlike license, unless stated otherwise. Cite this article:
Mount Mansfield Facts for Kids. Kiddle Encyclopedia.