Cambridge is a town in Lamoille County, Vermont, United States. The population was 3,659 at the 2010 U.S. Census, up from 3,186 at the 2000 census. Cambridge includes the villages of Jeffersonville and Cambridge. 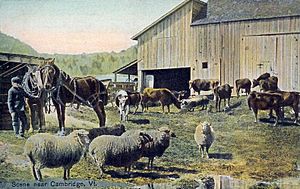 Granted on November 7, 1780, Cambridge was chartered on August 13, 1781 to Samuel Robinson, John Fassett, Jr., Jonathan Frost and 64 others. It was first settled in 1783 by John Safford from Piermont, New Hampshire. The intervales proved good but rough, best for grazing livestock. By 1839, the town had about 7,000 sheep. The Lamoille River offered water power for watermills. Industries included one woolen factory, one tannery, one gristmill, plus several sawmills and cabinet shops.

Both the St. Johnsbury & Lake Champlain Railroad and the Burlington & Lamoille Railroad passed through the town. The former is now the Lamoille Valley Rail Trail.

There were 1,266 households, out of which 32.8% had children under the age of 18 living with them, 60.3% were married couples living together, 6.9% had a female householder with no husband present, and 30.0% were non-families. 20.1% of all households were made up of individuals, and 5.5% had someone living alone who was 65 years of age or older. The average household size was 2.51 and the average family size was 2.91.

The largest employer in the town is Smugglers' Notch Resort.

All content from Kiddle encyclopedia articles (including the article images and facts) can be freely used under Attribution-ShareAlike license, unless stated otherwise. Cite this article:
Cambridge, Vermont Facts for Kids. Kiddle Encyclopedia.