Lamoille County is a county located in the U.S. state of Vermont. As of the 2020 census, the population was 25,945, and it is the third-least populous county in Vermont. Its shire town (county seat) is the town of Hyde Park, while Morristown is the county's largest town by population as well as its main commercial center. The county was created in 1835 and organized the following year.

The area was buried in a mile of ice during the ice age. When it melted partially, it created Lake Stowe. When it melted completely, the water from the lake ran out through the Lamoille River valley.

In 1972, the Lamoille Community College, along with other community colleges in Vermont, became the fifth member of the Vermont State Colleges system and was renamed Community College of Vermont.

In 2008, the state notified residents of Belvidere, Eden, Hyde Park, Johnson, Waterville and eight towns in the adjacent counties of Orleans and Franklin, that a review of health records from 1995 to 2006 had revealed that residents within ten miles (16 km) of the former asbestos mine on Belvidere Mountain had higher than normal rates of contracting asbestosis. The state and federal government continues to study this problem. In April 2009 the Vermont Department of health released a revised study which found that all of deaths related to the asbestos mine were caused by occupational exposure. The report also concluded that people living near the mines had no increased risk of asbestos related illness than people living anywhere else in Vermont.

In 2008, the county appeared to have disproportionate power in the legislature with the House Speaker, Shap Smith, from Morrisville, Floyd Nease, house majority leader, Senator Susan Bartlett, from Hyde Park, chair of the House Appropriations Committee, and Richard Westman, chair of the House Transportation Committee and the sole Republican.

Lamoille County is the only county in Vermont that does not have at least one U.S. Route passing through it, although all ten of the Lamoille County towns are served by Vermont state routes. 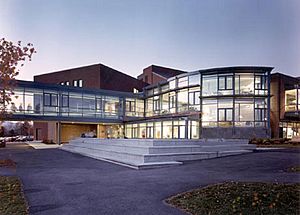 The Community College of Vermont (CCV) is located in Morrisville in Lamoille County.

All content from Kiddle encyclopedia articles (including the article images and facts) can be freely used under Attribution-ShareAlike license, unless stated otherwise. Cite this article:
Lamoille County, Vermont Facts for Kids. Kiddle Encyclopedia.