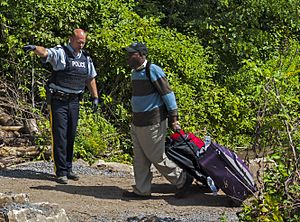 Asylum seeker crossing the Canadian-US border illegally from the end of Roxham Road in Champlain, NY, being directed to the nearby processing center by a Mountie

Champlain is a town in Clinton County, New York, United States. The population was 5,754 at the 2010 census. The town is located on the western shore of Lake Champlain, near the northern end of Lake Champlain and is on the U.S./Canadian border.

The town occupies the northeastern corner of Clinton County and the state of New York. Within the town are two villages: Champlain and Rouses Point.

Nearby Lake Champlain was an important military and trade route during the colonial period. The lake and the town were named in honor of Samuel de Champlain, who first surveyed the area in 1609. It was part of Canada until 1763, and became part of the United States in 1783.

The town was formed in 1788, the same year the county was established. In 1799, the town was reduced by the formation of the town of Chateaugay (now in Franklin County). The founding of the towns of Chazy and Mooers in 1804 further reduced Champlain.

Champlain is on the border with Canada and contains three border crossings: Champlain, Overton Corners, and Rouses Point. The Champlain Port of Entry on Interstate 87 is one of the four most important commercial gateways on the northern border, connecting New York City to the south with Montreal to the north via Quebec Autoroute 15.

Lake Champlain and the Richelieu River are on the east edge of the town, where the town has a common border with Grand Isle County, Vermont. The town line to the north is the international border with Saint-Bernard-de-Lacolle, Quebec, Canada.

The 176-mile (283 km) Adirondack Northway (Interstate 87) is a major north-south highway that begins at the Canada–United States border at Champlain and travels south to Albany, connecting to the New York State Thruway. U.S. Route 9 parallels I-87, and U.S. Route 11 runs east-west across the town. U.S. Route 2 intersects US-11 by Rouses Point. New York State Route 9B intersects US-11 in the northeast and US-9 in the southern part of Champlain, providing a highway closer to Lake Champlain. New York State Route 276 partly runs along the international border. Champlain is approximately 43 miles (69 km) south of Montreal.

All content from Kiddle encyclopedia articles (including the article images and facts) can be freely used under Attribution-ShareAlike license, unless stated otherwise. Cite this article:
Champlain, New York Facts for Kids. Kiddle Encyclopedia.