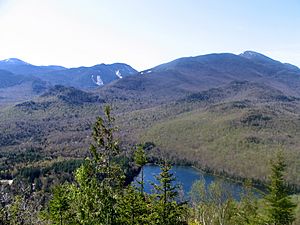 A steep but short and relatively easy hike compared to other mountains in the area, the Mountain offers great views of the High Peaks region, including Cascade Mountain, Mount Marcy, Algonquin Peak, Mount Colden and Indian Pass. It is near Heart Lake in North Elba. The climb offers one of the best views for the effort (a 710-foot (216 m) vertical ascent from the Loj – actual trail distance is approx. 2.6 miles roundtrip), with a sweeping vista of the Great Range of the Adirondacks. It is seven miles (11 km) south of Lake Placid.

The mountain was named in 1877 by Henry Van Hovenberg, who built the original Adirondack Loj, for his fiancée Josephine Schofield, who died shortly before they were to have been married.

All content from Kiddle encyclopedia articles (including the article images and facts) can be freely used under Attribution-ShareAlike license, unless stated otherwise. Cite this article:
Mount Jo Facts for Kids. Kiddle Encyclopedia.