The Adirondack High Peaks is the name given to 46 mountain peaks in the Adirondack Mountains of New York, United States that were originally believed to comprise all of the Adirondack peaks higher than 4,000 feet (1,219 m). However, later surveying showed that four of the peaks in the group are actually under this elevation, and one additional peak that is close to this elevation had been overlooked. Due to tradition, no mountains were removed from or added to the group as a result of the revised elevation estimates.

All except three are located in central and northern Essex County, primarily south of Lake Placid and Keene Valley. The others are just to the west in Franklin County. All the summits are on land owned by New York State as part of its Forest Preserve. Forty-two are in a vast tract of nearly 300,000 acres (1,200 km2) known as the High Peaks Wilderness Area, subdivided into central (26 peaks) and outer (16 peaks) zones. Nine of the peaks in the outer zone are in an area formerly known as the Dix Mountain Wilderness Area that was added to the High Peaks Wilderness in 2018. Giant Mountain and Rocky Peak Ridge are in the adjacent Giant Mountain Wilderness Area. Whiteface Mountain, which has a downhill ski area and a toll road to its summit, and Esther Mountain are set slightly to the north, in Wilmington.

The region contains many alpine lakes and meadows, wetlands, streams, and forests. The Eastern High Peaks Wilderness area is the most regulated area. Fires are not permitted; dogs must be leashed; overnight groups are limited to eight people and day groups to 15; and bear-resistant food canisters are required from April through November.

If you are traveling through this ecosystem, make sure to stay on the designated trail to prevent trampling vegetation and creating new routes. Camping is prohibited above any elevation greater than 4,000 ft on any of the Adirondack High Peaks. For more information on how to protect the fragile ecosystems of the Adirondack High Peak Region you can visit https://www.dec.ny.gov/index.html.

How to Reach the Summit of The High Peaks

Climbing neither Mount Marcy nor Algonquin Peak, the two highest of the High Peaks, requires technical skills, but Algonquin Peak is regarded as the more challenging climb. Twenty of the peaks have no official trail to the top, although rough informal routes, commonly referred to as "herd paths," have developed over the years. No true bushwhacking is required on any of the peaks, although some trails are still quite primitive.

If you are looking to get the great view of the Adirondack Region without the hike, there is a road that will lead you right to the summit of Whiteface Mountain. The road is called the Veterans' Memorial Highway.

Mount Marcy, the High Peak with the greatest height, is the tallest Mountain in New York.

Those who have climbed all 46 High Peaks are eligible to join the Adirondack Forty-Sixers club. 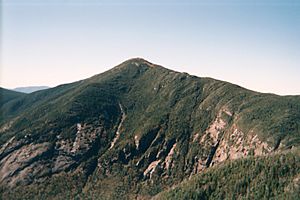 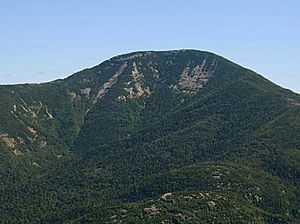 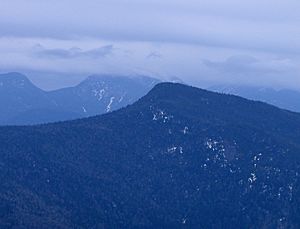 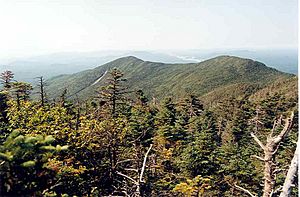 All content from Kiddle encyclopedia articles (including the article images and facts) can be freely used under Attribution-ShareAlike license, unless stated otherwise. Cite this article:
Adirondack High Peaks Facts for Kids. Kiddle Encyclopedia.