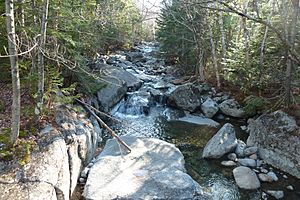 Phelps Mountain is a mountain located in Essex County, New York. The mountain is named after Orson Schofield "Old Mountain" Phelps (1817–1905), who cut the first trail up Mount Marcy and named several of the Adirondack peaks. It is the 32nd highest peak in New York. Phelps Mountain is flanked to the southeast by Table Top Mountain.

Phelps is climbed regularly, and has a well marked trail. The trail is rocky and is very steep in some parts of the final approach to the summit. There are good views of Marcy, Colden, and Algonquin near the summit. There are also views of the ridge formed by Table Top, Yard, and Big Slide. There is a partial view of The Great Range, and Giant can be seen in the distance.

Phelps Mountain is within the High Peaks Wilderness Area of the Adirondack State Park.

All content from Kiddle encyclopedia articles (including the article images and facts) can be freely used under Attribution-ShareAlike license, unless stated otherwise. Cite this article:
Phelps Mountain (New York) Facts for Kids. Kiddle Encyclopedia.