The Lake Champlain Bridge is a vehicular bridge traversing Lake Champlain between Crown Point, New York and Chimney Point, Vermont. It replaced an older bridge that was demolished in 2009. The bridge was designed and constructed during an aggressive two-year schedule to minimize the social and economic impact of the original bridge's demolition. It is the only fixed-link crossing of Lake Champlain/Champlain canal between US 4 in Whitehall, 42 miles (68 km) to the south and US 2 at Rouses Point, 85 miles (137 km) to the north.

The main arch span was prefabricated off-site in Port Henry, floated by barge to the already constructed approach spans, and then lifted into place on August 26, 2011. The completed bridge was originally scheduled to open on October 9, 2011, but was delayed due to construction delays from underwater debris and record flooding.

The bridge opened to the public on Monday, November 7, 2011, following a ribbon-cutting ceremony.

After state inspectors determined that the previous Champlain Bridge was beyond repair in 2009, the states of New York and Vermont agreed to replace it. The new bridge employs a modified network tied arch design. Flatiron Constructors of Broomfield, Colorado, the U.S. subsidiary of the German firm, Hochtief AG, won the contract for the new bridge, and groundbreaking took place on June 11, 2010. The bridge construction contract was for $69.6 million. It was completed six weeks ahead of schedule, but at a cost of $78.29 million.

A panorama of the replacement bridge under construction. The main arch span was brought in by barge and raised between the two approach spans shown above. 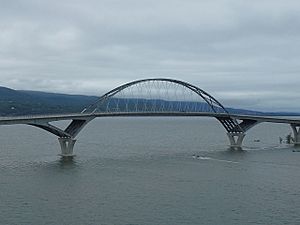 The completed bridge, as seen from the Crown Point Light

All content from Kiddle encyclopedia articles (including the article images and facts) can be freely used under Attribution-ShareAlike license, unless stated otherwise. Cite this article:
Lake Champlain Bridge (2011–present) Facts for Kids. Kiddle Encyclopedia.