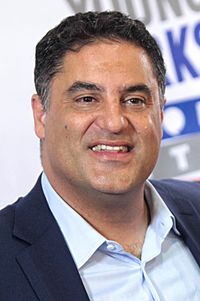 Cenk Kadir Uygur (born March 21, 1970) is a Turkish-American political activist, politician and commentator and Internet personality. He is the main host and co-founder of the Internet talk radio show The Young Turks (TYT). He also was the main host on the television version of the show that aired on Current TV and later Al Jazeera America.

Uygur was born in Istanbul, Turkey. He immigrated to East Brunswick, New Jersey when he was 8 years.

On November 14, 2019, Uygur announced his candidacy for the 2020 special election in California's 25th congressional district to replace Katie Hill.

All content from Kiddle encyclopedia articles (including the article images and facts) can be freely used under Attribution-ShareAlike license, unless stated otherwise. Cite this article:
Cenk Uygur Facts for Kids. Kiddle Encyclopedia.