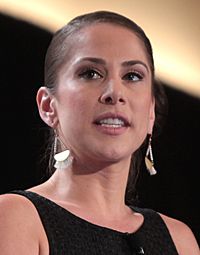 Anahit Misak Kasparian (born July 7, 1986) is an American host, producer and political pundit. She began working as a fill-in producer for the Internet talk radio show The Young Turks in 2007. She is the main host and a producer of the online The Young Turks. She also appeared on the television version of the show that aired on Current TV and later Al Jazeera America. She formerly hosted The Point on the TYT Network.

Kasparian was born in Los Angeles, California on July 7, 1986. Her parents were Armenian immigrants. She was raised in the Reseda neighborhood. She graduated from the Valley Alternative School, Van Nuys in 2004. She graduated from California State University, Northridge in 2007 with a Bachelor of Arts, Journalism (BAJ). She completed her Master of Political Science (MPS) in 2010. She is an agnostic.

All content from Kiddle encyclopedia articles (including the article images and facts) can be freely used under Attribution-ShareAlike license, unless stated otherwise. Cite this article:
Ana Kasparian Facts for Kids. Kiddle Encyclopedia.