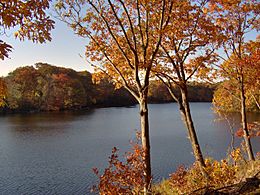 Westons Mill Pond section of Lawrence Brook, with Rutgers University on the opposite side

Lawrence Brook is a tributary of the Raritan River in Middlesex County, New Jersey, in the United States.

Lawrence Brook is a wildlife corridor, a bird migration area and a highly sensitive body of water. Power boats, except with an electric motor, are not permitted on the brook. 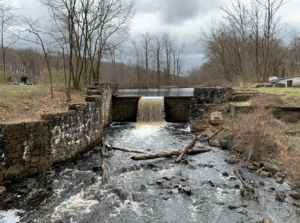 Succession and pathway of Lawrence Brook

The Lawrence Brook, a 30-mile inland waterway (New Jersey), connects from the Raritan Bay to the lesser known end; splitting apart into two branches in South Brunswick, this is a list of important landmarks in Central New Jersey where the Lawrence Brook is present (sometimes in larger water-body forms).

All content from Kiddle encyclopedia articles (including the article images and facts) can be freely used under Attribution-ShareAlike license, unless stated otherwise. Cite this article:
Lawrence Brook Facts for Kids. Kiddle Encyclopedia.