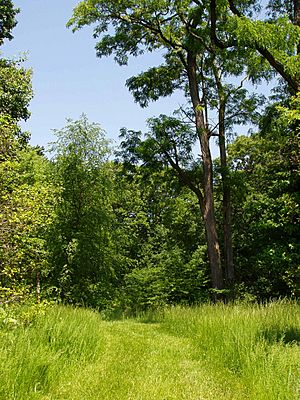 Rutgers Gardens (130 acres) is the official botanic garden of Rutgers University, located on the outskirts of Cook Campus, at 112 Ryders Lane, North Brunswick, New Jersey. The grounds include 60 acres of designed beds, specialty gardens, tree and shrub collections, lawns, and walking paths, as well as the adjoining 70-acre Frank G. Helyar Woods. A place of learning and beauty, Rutgers Gardens strives to provide a fun, educational, and engaging place for students, faculty, and the community to enjoy the natural world. The gardens are open year-round, without fee, and feature horticultural collections arranged in garden settings. In 2017 it was granted landmark status by the American Society for Horticultural Science.

The land was originally purchased in 1917. Rutgers Gardens—then called "Horticultural Farm No. 1"—housed the Experiment Station's peach-breeding program, although ornamental displays were also established in the early 1920s in conjunction with ongoing ornamental research. In 1930, the farm featured more than 600 varieties of dahlias and iris, including test gardens developed in coordination with the Dahlia Society of New Jersey and the American Iris Society. Trials of gladiolus were also established, in cooperation with the New Jersey Gladiolus Society. These and other displays were opportunities to showcase selected and developed varieties in cooperation with community organizations. Around this time, a shrub display garden containing over 200 species and numerous varieties was established, which remains one of the oldest surviving sections of the existing collection (which was expanded between 1930 and 1950). Some of the oldest hollies at Rutgers Gardens were planted in the late 1930s, and expanded through the 40s, 50s, and into the 60s, as part of an active breeding program. Many of these make up the foundation of what is now a significant collection. A 1936 photo of Horticultural Farm No. 1 shows a series of nine display gardens, of which the bearded iris display was the precursor to the current Donald B. Lacey Display Garden, originally constructed in 1964. Later additions and removals of plant, as well the establishment of various new ornamental and tribute gardens, have shaped Rutgers Gardens into its current form. 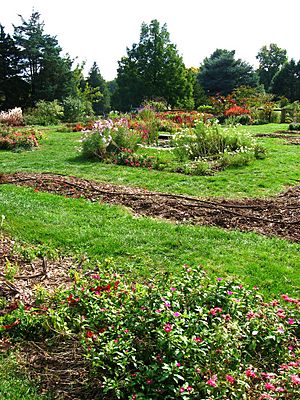 The name of Rutgers Gardens is strongly associated with that of Bruce "Doc" Hamilton. In the 1990s, despite strong opposition, Rutgers University planned to sell Rutgers Gardens for urban development. In 1993, Dr. Bruce Hamilton, Rutgers professor, accepted responsibility for directing the Gardens' management and funding. Thanks to his dedication, to generous supporters, and to the work of many volunteers, the Gardens survived for everybody's enjoyment.

Rutgers Gardens was once managed by its director, Bruce Crawford, and Laura Lawson, chair of Rutgers' Department of Landscape Architecture. Still a self-supporting entity, the funds necessary for maintaining the gardens, purchasing equipment and materials, supporting salaries, and providing public programs are raised through facility rentals, special events, membership dues and donations.

Every Friday, there is a farmer's market that attracts local business owners from across the county. Things that can be purchased include honey, Hungarian Rolls and dried mangos.

Current collections and features include: 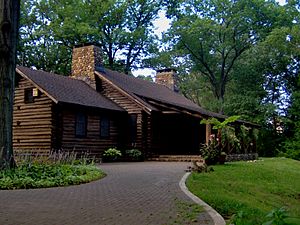 All content from Kiddle encyclopedia articles (including the article images and facts) can be freely used under Attribution-ShareAlike license, unless stated otherwise. Cite this article:
Rutgers Gardens Facts for Kids. Kiddle Encyclopedia.