Kids Encyclopedia Facts
Not to be confused with Milltown, Hunterdon County, New Jersey.

Milltown is a borough in Middlesex County, New Jersey, United States. The borough is nestled within the heart of the Raritan Valley region, with Lawrence Brook (a Raritan river tributary) flowing through the center of the community. As of the 2010 United States Census, the borough's population was 6,893, reflecting a decrease of 107 (-1.5%) from the 7,000 counted in the 2000 Census, which had in turn increased by 32 (+0.5%) from the 6,968 counted in the 1990 Census.

Milltown was incorporated as a borough by an act of the New Jersey Legislature on January 29, 1889, from portions of North Brunswick, based on the results of a referendum held three days earlier. The borough was reincorporated by resolution of the borough council on May 2, 1896. A portion of East Brunswick Township was annexed in 1902. Originally known as Bergen's Mill, named for Jacob I. Bergen who owned the grist mill, the name is believed to have become "Milltown" from residents "going to the mill in town".

The groundbreaking anxiolytic and sedative drug Miltown (meprobamate) developed by Carter Products, which became available to the public in the mid-1950s, was named for the borough.

Long before the arrival of the first Europeans, the Lenape had established settlements along the Lawrence Brook. The discovery of many artifacts in the area above today's municipal building (now a small county park) suggests the presence of a Native American settlement. In 1678, Thomas Lawrence, a New York baker, acquired a large area around the Lawrence Brook, which likely included today's Milltown. The Lawrence Brook was then called Piscopeek (and on later maps, Lawrence's Brook). The names and marks of several Native Americans (Quemareck, Quesiacs, Isarick, Metapis, Peckawan and Turantaca) appear on the bill of sale. In 1769, Fulcard Van Nordstrand advertised the sale of a large gristmill on the bank of Lawrence Brook. It would soon be called Lawrence Brook Mill. The 1903 classic western film The Great Train Robbery was shot in Milltown. 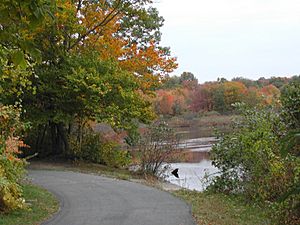 In March 2010, the Milltown City Council voted against changing the name of Petain Avenue, citing the difficulties that the street's residents would endure if the name changed. Petain Avenue is named for Philippe Pétain, a French World War I general who became the leader of the Vichy France government during World War II. The Vichy Regime willfully collaborated with Nazi Germany, taking state action against "undesirables", including Jews, Protestants, gays, gypsies, and left-wing activists. In total, the Vichy government participated in the deportation of 76,000 Jews to German extermination camps, although this number varies depending on the account; only 2,500 survived the war. After the war, Petain was charged with perjury and sentenced to death, though this was commuted to life imprisonment due to his advanced age. France has since changed the name of every street formerly known as Petain.

The climate in the area is characterized by hot, humid summers and generally mild to cool winters. According to the Köppen Climate Classification system, Milltown has a humid subtropical climate, abbreviated "Cfa" on climate maps.

There were 2,599 households out of which 31.1% had children under the age of 18 living with them, 60.9% were married couples living together, 9.3% had a female householder with no husband present, and 26.3% were non-families. 20.7% of all households were made up of individuals, and 8.6% had someone living alone who was 65 years of age or older. The average household size was 2.65 and the average family size was 3.10.

County Route 617 (Ryders Lane) is a major artery serving the borough along the eastern border. The New Jersey Turnpike passes through for about a mile, but the closest interchange is in neighboring East Brunswick Township. Also, U.S. 1 is outside in neighboring North Brunswick.

The Raritan River Railroad ran through Milltown, but is now defunct along this part of the line. The track and freight station still remain.

The Milltown Public Schools serves students in public school for pre-kindergarten through eighth grade. As of the 2017–18 school year, the district, comprised of two schools, had an enrollment of 755 students and 63.6 classroom teachers (on an FTE basis), for a student–teacher ratio of 11.9:1. Schools in the district (with 2017-18 enrollment data from the National Center for Education Statistics) are Parkview School (335 students; in grades PreK-3) and Joyce Kilmer School (411 students; in grades 4-8).

For ninth through twelfth grades, public school students attend Spotswood High School in Spotswood as part of a sending/receiving relationship with the Spotswood Public Schools, which also serves students from Helmetta. In 2013, Milltown and Spotswood had discussions of expanding the partnership between the two districts beyond the sending relationship. As of the 2017–18 school year, the high school had an enrollment of 679 students and 58.0 classroom teachers (on an FTE basis), for a student–teacher ratio of 11.7:1.

The community is also served by the Greater Brunswick Charter School, a K-8 charter school serving students from Milltown, Edison, Highland Park and New Brunswick. As of the 2017–18 school year, the school had an enrollment of 395 students and 33.0 classroom teachers (on an FTE basis), for a student–teacher ratio of 12.0:1.

Eighth grade students from all of Middlesex County are eligible to apply to attend the high school programs offered by the Middlesex County Vocational and Technical Schools, a county-wide vocational school district that offers full-time career and technical education at Middlesex County Academy in Edison, the Academy for Allied Health and Biomedical Sciences in Woodbridge and at its East Brunswick, Perth Amboy and Piscataway technical high schools, with no tuition charged to students for attendance.

Our Lady of Lourdes School (PreK-8) operates under the supervision of Roman Catholic Diocese of Metuchen.

People who were born in, residents of, or otherwise closely associated with Milltown include:

All content from Kiddle encyclopedia articles (including the article images and facts) can be freely used under Attribution-ShareAlike license, unless stated otherwise. Cite this article:
Milltown, New Jersey Facts for Kids. Kiddle Encyclopedia.