Middlesex was incorporated as a borough by an act of the New Jersey Legislature on April 9, 1913, from portions of Piscataway, based on the results of a referendum held on May 6, 1913. The borough's name derives from Middlesex, England.

Middlesex was a portion of Piscataway Township, until May 6, 1913 when it was incorporated as a separate entity through the action of the state legislature and local referendum. George Harris was elected as the first mayor and the first borough council was elected at the same time. Two constables were the law enforcement officers and were soon assisted by five appointed marshals.

In 1905, the Lincoln section of Middlesex organized a volunteer fire company and that set the organization of four other fire companies in the Borough.

There were already a few schools set up before Middlesex became a borough in 1913. The Harris Lane School was a one-room schoolhouse and it was the oldest school in Middlesex County, at one time, dating back to its construction in the 1790s. The original Pierce School was known as the East Bound Brook School House and The Parker House was also used for education until it was converted into a two-family house. As the Borough grew new schools were constructed to accommodate many more students. Our Lady of Mt. Virgin School was the first parochial school built in 1954.

Unincorporated communities, localities and place names located partially or completely within the borough include East Bound Brook and Lincoln.

Middlesex is in the central division of the Raritan Valley (a line of cities in central New Jersey), along with Dunellen, Bound Brook, and South Bound Brook.

NJ Transit provides service to and from the Port Authority Bus Terminal in Midtown Manhattan on the 114 route and to Newark on the 65 and 66 routes.

The Middlesex Board of Education serves public school students in pre-kindergarten through twelfth grade. The district includes three elementary schools, a middle school and a high school. As of the 2017–18 school year, the district, comprised of five schools, had an enrollment of 2,077 students and 175.4 classroom teachers (on an FTE basis), for a student–teacher ratio of 11.8:1. Schools in the district (with 2017-18 enrollment data from the National Center for Education Statistics) are Hazelwood Elementary School (207 students; in grades PreK-3), Parker Elementary School (222; K-3), Watchung Elementary School (211; K-3), Von E. Mauger Middle School (792; 4-8) and Middlesex High School (635; 9-12). The district's superintendent is Dr. Frederick Williams. 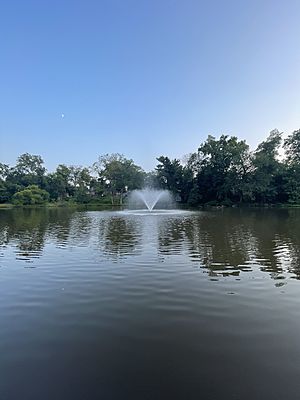 People who were born in, residents of, or otherwise closely associated with Middlesex include:

All content from Kiddle encyclopedia articles (including the article images and facts) can be freely used under Attribution-ShareAlike license, unless stated otherwise. Cite this article:
Middlesex, New Jersey Facts for Kids. Kiddle Encyclopedia.