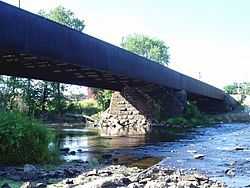 Bound Brook was originally incorporated as a town by an act of the New Jersey Legislature on March 24, 1869, within portions of Bridgewater Township. On February 11, 1891, it was reincorporated as a borough, based on the results of a referendum held on the previous day.

The area was first settled in 1681 and a community was established near the Bound Brook stream of the same name, which flows into the Raritan River via the Green Brook on the eastern side of the borough. The brook, which was mentioned as a boundary in a Native American deed, provides the source of the borough's name.

A wooden bridge over the Raritan River was erected as early as 1761 and named Queen's Bridge in 1767. Later, it became a covered bridge. During the American Revolutionary War, the bridge was used repeatedly by both sides including during the Battle of Bound Brook in 1777. In 1875, the wooden bridge was replaced by a steel pipe truss bridge. More than 100 years later, that bridge was itself replaced by a steel girder bridge in 1984, still using the old pillars. The bridge was renovated and repaved in 2007.

The Battle of Bound Brook, one of the battles in the New York and New Jersey campaign during the American Revolutionary War, occurred on April 13, 1777, and resulted in a defeat for the Continental Army, who were routed by about 4,000 troops under British command.

The borough borders the municipalities of Bridgewater Township and South Bound Brook in Somerset County; and Middlesex Borough in Middlesex County.

Since the southern portion of the borough (including the downtown area) is a low-lying natural flood plain of the Raritan River, Bound Brook has suffered occasional severe flooding after heavy rain. Extensive flood control measures were put into place during 1999–2015 to provide protection from 150-year floods.

Bound Brook prides itself on having a diverse community. It has many thriving small businesses, including restaurants and small markets.

There were 3,586 households out of which 32.7% had children under the age of 18 living with them, 45.1% were married couples living together, 14.9% had a female householder with no husband present, and 32.1% were non-families. 22.8% of all households were made up of individuals, and 7.9% had someone living alone who was 65 years of age or older. The average household size was 2.89 and the average family size was 3.28.

The borough had one of the highest Costa Rican percentages of any municipality in the United States and third-highest in New Jersey (population 500+), with 3.4% of residents in the 2010 Census reporting that they were of Costa Rican birth.

There were 3,615 households of which 31.0% had children under the age of 18 living with them, 49.1% were married couples living together, 11.9% had a female householder with no husband present, and 31.9% were non-families. 23.1% of all households were made up of individuals and 9.2% had someone living alone who was 65 years of age or older. The average household size was 2.81 and the average family size was 3.21.

The borough had the highest Costa Rican percentage of any municipality in the United States (population 500+), with 14.7% of residents in the 2000 Census reporting that they were of Costa Rican birth.

New Jersey Route 28 travels east-west through the center of Bound Brook, while U.S. Route 22 clips the northern portion of the borough. County Routes 525, 527, 533 also pass through.

The borough is served by the Bound Brook train station, which offers NJ Transit service on the Raritan Valley Line to Newark Penn Station. The historic station building on the north side of the tracks is located at 350 E. Main Street and was constructed in 1913. It is now a restaurant; the other station building on the south side is now privately owned. A pedestrian tunnel connects the south and north sides of the tracks. There are also Conrail tracks going past the station, used for freight trains to and from Newark.

NJ Transit offers bus service to and from the Port Authority Bus Terminal in Midtown Manhattan on the 114 and 117 routes, along with local service to Newark on the 65 and 66 routes. 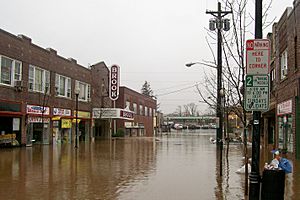 The lower downtown area of Bound Brook has been infamous for flooding of the Raritan River. In September 1999, many structures near the commercial zone were damaged or destroyed by record Raritan floods resulting from Hurricane Floyd. This disaster reinvigorated a long-planned effort called the Green Brook Flood Control Project that would protect Bound Brook from up to a 150-year flooding event from the Raritan River and its tributaries, the Middle Brook and Green Brook that comprise the western and eastern boundaries of the town. During 1999–2015, the United States Army Corps of Engineers implemented extensive flood control measures to provide protection from future floods.

Bound Brook's downtown flooding led to several out-of-control fires over its history, including the fires of 1881 and 1887 which led to the formation of the Bound Brook Fire Department, and another major fire in 1896. During Hurricane Floyd in 1999, a fire began in Otto Williams Harley Davidson on Main Street. With the building cut off by flood water, the fire spread quickly to two other structures before the Bound Brook Fire Department could contain it, then under the command of Chief Richard S. Colombaroni. Using fire boats from the New York City Fire Department as well as extensive help from mutual aid companies, the fire was stopped before two other buildings on Main Street and others nearby on Mountain Avenue, could be affected.

All content from Kiddle encyclopedia articles (including the article images and facts) can be freely used under Attribution-ShareAlike license, unless stated otherwise. Cite this article:
Bound Brook, New Jersey Facts for Kids. Kiddle Encyclopedia.