What is now South Bound Brook was originally formed as a town within Franklin Township. On March 16, 1869, the name of the community was changed to Bloomington, which lasted until May 29, 1891, when the name reverted to South Bound Brook town. South Bound Brook was incorporated as an independent borough by an act of the New Jersey Legislature on April 11, 1907, based on the results of a referendum held on May 1, 1907. 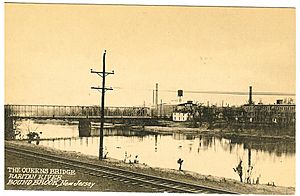 The area was first settled in 1681 and a community was established near the Bound Brook stream of the same name, which flows into the Raritan River via the Green Brook on the eastern side of the borough. The brook, which was mentioned as a boundary in a Native American deed, provides the source of the borough's name.

The area was originally a Dutch community with apple orchards and just west peach orchards. The Abraham Staats House (c. 1740), located on the south side of Main Street, served as the headquarters of Baron Von Steuben during the American Revolutionary War. The house today is privately owned.

A wooden bridge over the Raritan River was erected as early as 1761 and named Queen's Bridge in 1767. Later, it became a covered bridge. During the Revolutionary War, the bridge was used repeatedly by both sides including during the Battle of Bound Brook in 1777. In 1875, the wooden bridge was replaced by a steel pipe truss bridge. More than 100 years later, that bridge was itself replaced by a steel girder bridge in 1984, still using the old pillars. The bridge was renovated and paved in 2007.

At this spot in what on January 4, 1777, General Washington decided to move his troops to Morristown for the winter, thus ending the victorious Trenton-Princeton campaign, rather than attack New Brunswick.

The Battle of Bound Brook, one of the battles in the New York and New Jersey campaign during the American Revolutionary War, occurred on April 13, 1777, and resulted in a defeat for the Continental Army, who were routed by about 4,000 troops under British command.

At dawn on April 13, 1777, Hessian Captain Ewald's assault over the Queens Bridge spanning the Raritan River between South Bound Brook and Bound Brook was pinned down by "murderous fire" from the American soldiers stationed at half moon battery. Advancing North along present day Easton Avenue, Hessian Colonel Donop pushed aside American outposts and arrived 15 minutes after Ewald's attack had faltered. Advancing over the Queens Bridge, Donop's troops engaged the Americans causing them to retreat from the battery. Donop, Ewald's, and General Grant's troops pursued the American troops as they fought through the streets of Bound Brook.

The Reformed Church, also on Main Street (near borough hall) was built in 1848 and has been declared a local historical site by the borough council. Originally called the Dutch Reformed Church of Bound Brook, it has gone through very few changes over the years. A pipe organ received from Andrew Carnegie has been removed, and the stained glass windows, which had been added well after the original construction. The Reverend Thomas DeWitt Talmadge was a member and preached at the church.

Originally part of Franklin Township and named Bloomington, South Bound Brook was incorporated as a borough by the New Jersey Legislature in 1907.

In the mid-1970s a teen from the town created a plan for an environmental commission and presented it to the council. James Manley got his commission and the first order of business was to find out what the white piles of waste on the tow path between the Delaware and Raritan Canal and Raritan River consisted of. It turned out to be 17% crystal asbestos by volume. Since there was no New Jersey State regulation for the disposal, this became a landmark case. The waste was hauled in dump trucks through Bound Brook to the floodplain south of West Main Street and dumped. A trail of asbestos dust led from the old dump site to the new dump location.

The main downtown street in South Bound Brook, known as Main Street, has been refurbished with new sidewalks, lighting, signage and a number of newly renovated stores.

A roofing material manufacturing facility known as GAF Manufacturing was located in South Bound Brook for over a century along Main Street. The site was dormant for about two decades and sat as an eyesore and reminder of the town's industrial past. New townhomes have been built on the GAF Manufacturing site, along the Delaware and Raritan Canal, which provide the downtown area a new modern look and many new residents.

Part of the redevelopment is being held up by a lawsuit by John Fanaro of Fanaro Carpeting over the right of eminent domain, as the borough tried to seize property along Main Street that is in front of the new townhomes. The redevelopment plan called for the older stores to be razed and replaced with new stores that had parking in back and a dozen rental apartments on the second floor.

A new condominium development along Elizabeth Street in the central part of town was finished in 2010.

The borough borders Bound Brook, Bridgewater Township and Franklin Township in Somerset County; and both Middlesex Borough and Piscataway in Middlesex County.

There were 1,733 households out of which 30.1% had children under the age of 18 living with them, 45.0% were married couples living together, 13.1% had a female householder with no husband present, and 35.4% were non-families. 27.6% of all households were made up of individuals, and 6.5% had someone living alone who was 65 years of age or older. The average household size was 2.63 and the average family size was 3.22.

There were 1,632 households out of which 31.3% had children under the age of 18 living with them, 51.0% were married couples living together, 10.8% had a female householder with no husband present, and 32.4% were non-families. 25.1% of all households were made up of individuals and 8.0% had someone living alone who was 65 years of age or older. The average household size was 2.75 and the average family size was 3.31.

The main attraction in South Bound Brook is the Delaware and Raritan Canal, which forms the northern and eastern boundaries of the town. The canal and its D&R Canal Trail are used for numerous recreational purposes from light boating to hiking and biking. Also of note is the Raritan River which lies on the far side of the canal and provides further recreational opportunities such as boating and fishing. The Queens Bridge crosses the canal and river, connecting to Bound Brook.

The Raritan River Greenway is a proposed path that would link Branchburg Township to the East Coast Greenway with the Delaware and Raritan Canal trail in South Bound Brook. 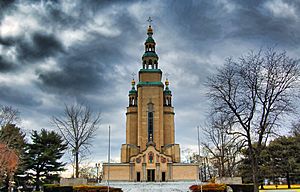 St. Andrew Memorial Church was built as a memorial honoring victims of the Holodomor and serves as the headquarters of the Ukrainian Orthodox Church of the USA.

Interstate 287, which provides access and connections to large parts of New Jersey and New York is located near the western boundary of South Bound Brook and provides two local interchanges.

NJ Transit provides frequent train service on the Raritan Valley Line to/from Penn Station Newark and Penn Station New York via the nearby Bound Brook Train Station, which is about a five- to ten-minute walk from downtown South Bound Brook.

NJ Transit bus service to and from the Port Authority Bus Terminal in Midtown Manhattan is provided on the 114 and 117 routes, with service to Newark available on the 65 bus line.

All content from Kiddle encyclopedia articles (including the article images and facts) can be freely used under Attribution-ShareAlike license, unless stated otherwise. Cite this article:
South Bound Brook, New Jersey Facts for Kids. Kiddle Encyclopedia.