Higher education is after secondary education. Through attending college a higher degree (or title) can be gained. Generally, people must be 18 years old or over to enter higher education. They also need to have completed primary school and secondary education. Usually some kind of selection is used. Exams can be of state, local or university level. Sometimes no selection exists. Some open universities encourage older adults to apply, whether they were good at school or not. 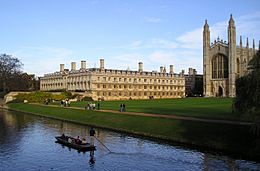 Higher education is either professional or academic. You can study for a diploma or a degree. Graduates can study for a master's or doctorate. Places of higher education were traditionally called universities, but there are other names like institute, teaching training college, academy, conservatory, and polytechnic. (The names depend on the country).

Research work is done at this level. Colleges often also reach out to employers and offer cultural or sporting events open to the local community.

The importance of higher education in society changes according to the country; for example, in many countries a student goes to university to obtain a diploma for work, but university is also often a time during which the student learns to be independent. Students also learn to mix with people of different origins, and to grow as people. Richer students can study in a place far from their hometown, but kids from poor neighbourhoods may be unable to afford college at all without a scholarship of some kind.

All content from Kiddle encyclopedia articles (including the article images and facts) can be freely used under Attribution-ShareAlike license, unless stated otherwise. Cite this article:
Higher education Facts for Kids. Kiddle Encyclopedia.