Bret Harte (born Francis Brett Hart; August 25, 1836 – May 5, 1902) was an American short story writer and poet, best remembered for his short fiction featuring miners, gamblers, and other romantic figures of the California Gold Rush. In a career spanning more than four decades, he wrote poetry, plays, lectures, book reviews, editorials, and magazine sketches in addition to fiction. As he moved from California to the eastern U.S. to Europe, he incorporated new subjects and characters into his stories, but his Gold Rush tales have been the works most often reprinted, adapted, and admired.

Harte was born in 1836 in New York's capital city of Albany. He was named after his great-grandfather, Francis Brett. When he was young, his father, Henry, changed the spelling of the family name from Hart to Harte. Henry's father was Bernard Hart, an Orthodox Jewish immigrant who flourished as a merchant, becoming one of the founders of the New York Stock Exchange. Later, Francis preferred to be known by his middle name, but he spelled it with only one "t", becoming Bret Harte.

An avid reader as a boy, Harte published his first work at age 11, a satirical poem titled "Autumn Musings", now lost. Rather than attracting praise, the poem garnered ridicule from his family. As an adult, he recalled to a friend, "Such a shock was their ridicule to me that I wonder that I ever wrote another line of verse". His formal schooling ended when he was 13, in 1849.

Harte moved to California in 1853, later working there in a number of capacities, including miner, teacher, messenger, and journalist. He spent part of his life in the northern California coastal town of Union (now Arcata), a settlement on Humboldt Bay that was established as a provisioning center for mining camps in the interior.

The Wells Fargo Messenger of July 1916, relates that, after an unsuccessful attempt to make a living in the gold camps, Harte signed on as a messenger with Wells Fargo & Co. Express. He guarded treasure boxes on stagecoaches for a few months, then gave it up to become the schoolmaster at a school near the town of Sonora, in the Sierra foothills. He created his character Yuba Bill from his memory of an old stagecoach driver.

Among Harte's first literary efforts, a poem was published in The Golden Era in 1857, and, in October of that same year, his first prose piece on "A Trip Up the Coast". He was hired as editor of The Golden Era in the spring of 1860, which he attempted to make into a more literary publication. Mark Twain later recalled that, as an editor, Harte struck "a new and fresh and spirited note" which "rose above that orchestra's mumbling confusion and was recognizable as music". Among his writings were parodies and satires of other writers, including The Stolen Cigar-Case featuring ace detective "Hemlock Jones", which Ellery Queen praised as "probably the best parody of Sherlock Holmes ever written".

The 1860 massacre of between 80 and 200 Wiyot Indians at the village of Tuluwat (near Eureka in Humboldt County, California) was reported by Harte in San Francisco and New York. While serving as assistant editor of the Northern Californian, Harte was left in charge of the paper during the temporary absence of his boss, Stephen G. Whipple.

After he published the editorial, Harte's life was threatened, and he was forced to flee one month later. Harte quit his job and moved to San Francisco, where an anonymous letter published in a city paper is attributed to him, describing widespread community approval of the massacre. In addition, no one was ever brought to trial, despite the evidence of a planned attack and of references to specific individuals, including a rancher named Larabee and other members of the unofficial militia called the Humboldt Volunteers. 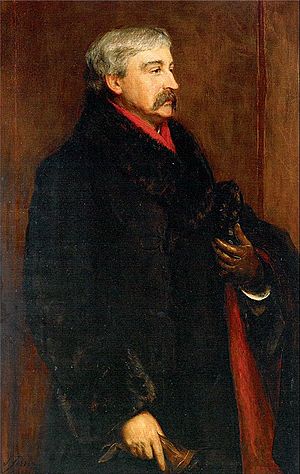 Harte married Anna Griswold on August 11, 1862, in San Rafael, California. From the start, the marriage was rocky. Some suggested that she was handicapped by extreme jealousy, while early Harte biographer Henry C. Merwin privately concluded that she was "almost impossible to live with".

In 1865, Harte was asked by bookseller Anton Roman to edit a book of California poetry; it was to be a showcase of the finest California writers. When the book, called Outcroppings, was published, it contained only 19 poets, many of them Harte's friends (including Ina Coolbrith and Charles Warren Stoddard). The book caused some controversy, as Harte used the preface as a vehicle to attack California's literature, blaming the state's "monotonous climate" for its bad poetry. While the book was widely praised in the East, many newspapers and poets in the West took umbrage at his remarks.

In 1868, Harte became editor of The Overland Monthly, another new literary magazine, published by Roman Anton with the intention of highlighting local writings. The Overland Monthly was more in tune with the pioneering spirit of excitement in California. Harte's short story "The Luck of Roaring Camp" appeared in the magazine's second issue, propelling him to nationwide fame.

When word of Charles Dickens's death reached Harte in July 1870, he immediately sent a dispatch across the bay to San Francisco to hold back the forthcoming issue of the Overland Monthly for 24 hours so that he could compose the poetic tribute, "Dickens in Camp".

Harte's fame increased with the publication of his satirical poem "Plain Language from Truthful James" in the September 1870 issue of the Overland Monthly. The poem became better known by its alternate title, "The Heathen Chinee", after being republished in a Boston newspaper in 1871. It was also quickly republished in a number of other newspapers and journals, including the New York Evening Post, the New York Tribune, the Boston Evening Transcript, the Providence Journal, the Hartford Courant, Prairie Farmer, and the Saturday Evening Post. Harte was chagrined, however, to find that the popularity of the poem, which he had written to criticize the prevalence of anti-Chinese sentiment among the white population of California, was largely the result of its being taken literally by the very people he had lampooned, who completely misconstrued the ironic intent of Harte's words.

He was determined to pursue his literary career and traveled back East with his family in 1871 to New York and eventually to Boston, where he contracted with the publisher of The Atlantic Monthly for an annual salary of $10,000, "an unprecedented sum at the time". His popularity waned, however, and by the end of 1872, he was without a publishing contract and increasingly desperate. He spent the next few years struggling to publish new work or republish old, and delivering lectures about the gold rush. The winter of 1877–1878 was particularly hard for Harte and his family. He later recalled it as a "hand-to-mouth life" and wrote to his wife Anna, "I don't know—looking back—what ever kept me from going down, in every way, during that awful December and January".

After months of soliciting for such a role, Harte accepted the position of United States Consul in the town of Krefeld, Germany, in May 1878. Mark Twain had been a friend and supporter of Harte's until a substantial falling out, and he had previously tried to block any appointment for Harte. In a letter to William Dean Howells, he complained that Harte would be an embarrassment to the United States because, as he wrote, "Harte is a liar, a thief, a swindler, a snob, a sot, a sponge, a coward, a Jeremy Diddler, he is brim full of treachery... To send this nasty creature to puke upon the American name in a foreign land is too much". Eventually, Harte was given a similar role in Glasgow in 1880. In 1885, he settled in London. Throughout his time in Europe, he regularly wrote to his wife and children and sent monthly financial contributions. He declined, however, to invite them to join him, nor did he return to the United States to visit them. His excuses were usually related to money. During the 24 years that he spent in Europe, he never abandoned writing, and maintained a prodigious output of stories that retained the freshness of his earlier work.

He died in Camberley, England, in 1902 of throat cancer, and is buried at Frimley. His wife Anna (née Griswold) Harte died on August 2, 1920. The couple lived together only 16 of the 40 years that they were married. 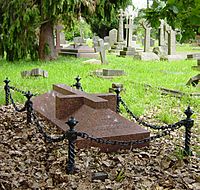 Inscription on gravestone: "Death shall reap the braver harvest."

All content from Kiddle encyclopedia articles (including the article images and facts) can be freely used under Attribution-ShareAlike license, unless stated otherwise. Cite this article:
Bret Harte Facts for Kids. Kiddle Encyclopedia.