Munster is a town located in North Township, Lake County, Indiana, United States. This bedroom community lies in the Chicago metropolitan area, approximately 30 miles (48 km) southeast of the Chicago Loop, and shares municipal boundaries with Hammond to the north, Highland to the east, Dyer and Schererville to the south and Lansing and Lynwood directly west of the Illinois border. The 2010 U.S. Census counted the town's population at 23,603. 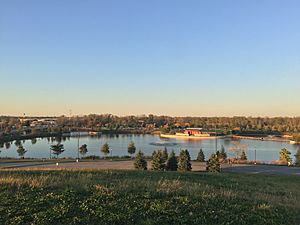 View of the Centennial Park lake and amphitheater, opened in 2007.

The town's boundaries contain three small lakes, one of which, located within Centennial Park, is marshy and undeveloped. Munster is bordered on the north by the Little Calumet River, a shallow river surrounded by a thin strip of wooded area; and on the West by the Illinois state line.

The Ibach House and Stallbohm Barn-Kaske House are listed in the National Register of Historic Places.

The earliest known inhabitants of the area were the Potawatomi. Although a village did not exist in what was to become Munster's town boundaries, a trail along the dry sandy ridge now known as Ridge Road was well traveled by the tribe. Today, Munster's downtown area, the Town Hall, Police and Fire Department headquarters, the Centre for the Visual and Performing Arts, and the Munster Post Office are all situated on Ridge Road.

In the late 17th and early 18th centuries, the area that is today Munster was part of land claimed by France as French territory. In the 1760s the British claimed the land where the Potawatomi lived as part of the British Empire. Twenty years later George Rogers Clark overran the British, claiming the land for the new and independent country known as the United States of America. In 1828 the federal government relocated the Potawatomi Indians to the Oklahoma territory.

As the numbers of Native Americans dwindled, pioneer settlers began to inhabit the area which would become Munster.

When Jacob Munster, a young man from the Netherlands who until the 1860s spelled his surname "Monster," opened an area General Store complete with a U.S. postal station on the back, the local farmers and settlers came to rely on the postal station, which soon became a United States Post Office. The post office was named Munster, as it was located in Jacob Munster's general store.

Before long more and more people moved to the "Munster" Area, and in 1907 Munster was incorporated as a town, with 76 residents voting "yes" for the incorporation and 28 voting "no." 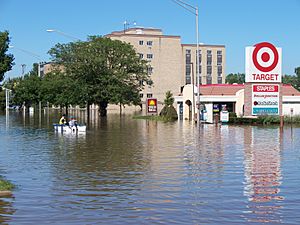 Munster soon became a booming town that attracted many people. Munster saw difficult times through the rough years of the Great Depression and the two World Wars, like many other new towns in America. During the Cold War, Munster served as the site of the Nike-Zeus Missile defense base C-46. The site was closed in 1971, and is now under private ownership.

In September 2008, Munster's northern portions suffered record flooding resulting from the impact of Hurricane Ike, which caused the Little Calumet River to overflow. A main break occurred in the levee located near the intersection of Calumet Avenue and River Drive in the northwest quadrant of the town. Munster has requested the Army Corps of Engineers to elevate the levee in low-lying areas. The levee improvements have been completed and the majority of homes destroyed have been rebuilt, in most cases, with larger, more amenity-filled homes.

The 2010 Comprehensive Plan for Munster's next twenty years includes plans for a new town center with shopping and dining to be organized around a proposed train station. 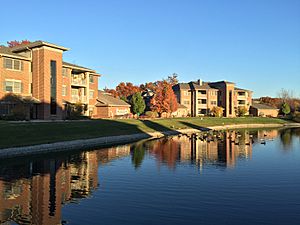 There were 9,015 households, of which 32.9% had children under the age of 18 living with them, 59.1% were married couples living together, 9.6% had a female householder with no husband present, 3.9% had a male householder with no wife present, and 27.5% were non-families. 24.6% of all households were made up of individuals, and 13.1% had someone living alone who was 65 years of age or older. The average household size was 2.59 and the average family size was 3.10. 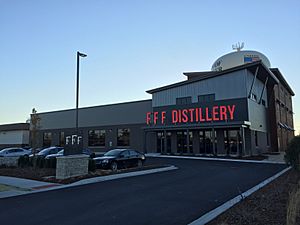 The newest addition to the Three Floyds Brewing Company is the distillery.

The town is home to a number of local, regional and national companies and extensive community resources. Among them are the Community Hospital, the Center for Visual and Performing Arts, The Times of Northwest Indiana newspaper, a PepsiCo bottling and distribution facility, a Whole Foods Market distribution center, the Community Veterans Memorial, the LEED-certified Centennial Park and Golf Course, Kaske House Museum at Heritage Park, Bieker Woods Nature Area, eleven miles of bike paths, an innovative Public Art and Sculpture Program, the new Munster Music Festival, the Munster Centennials Vintage Baseball Team, and the Babe Ruth Baseball.

Munster is also home to the Three Floyds Brewing Company, a microbrewery and craft beer-drinker's destination that has gained regional cult status, most notably for its 'Dark Lord Day' event, which draws 6,000 people to the Munster brewery every April. 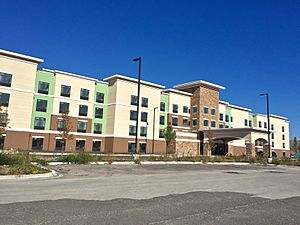 Homewood Suites by Hilton is one of several new additions to the Lake Business Center.

In spring 2011, Simborg Development revitalized plans for a $60 million renovation of the 72-acre Lake Business Center site fronting Calumet Avenue that will open new commercial opportunities for the Town of Munster. This development, originally to be named Munster Town Center that would have created a mixed-use center of retail shops and restaurants, commercial offices, medical facilities as well as an extended-stay hotel, was modified to maintain the warehouse facility and maintain a high-tech image exterior for the development.

Current tenants include DaVita Dialysis, MAC Medical Supply Co. Inc., Tec Air Inc., and Community Hospital Therapy Center while Noodles & Company and Meatheads have their restaurants in a two-unit outlot building. Additional tenants include Midwest Orthopaedics at Rush as well as Starbucks and Potbelly whom each have standalone restaurants just south of the Noodles & Meatheads building. A Homewood Suites by Hilton hotel anchors the north end of the development.

One of Munster's newest redevelopment projects is the area immediately surrounding the former Munster Steel site, located to the north of the town's Centennial Park. The area, named "Centennial Village," will be a mixed-use transit-oriented development that will feature both retail and multi-unit residential housing once it is completed. The Calumet Avenue grade separation has been planned since the early 1940s, with Henry Ford leading the change. However, American involvement in World War II and the creation of the federal highway system stopped these plans until the present day.

The project will be completed in two phases; it is part of the larger 45th Street/Calumet Ave underpass and realignment project in which Phase 1 includes extending 45th St east into the Centennial Village development with two new stoplights and creating an underpass under the CN railroad tracks to align with 45th St at Columbia Ave. Meanwhile, Phase 2 includes creating an underpass at Calumet Ave.

The Northern Indiana Commuter Transportation District is developing the West Lake Corridor project—a 9-mile extension of the south shore railroad from Hammond, IN south to the border of Munster, IN and Dyer, IN. The project will include two train stations in Hammond and two train stations in Munster (one station at Ridge Rd. & Manor Ave. and another station at Main St. & Columbia Ave.). In addition, a maintenance facility will be built either in Hammond or Dyer. If built in Hammond, then a layover facility will be built in Dyer. The estimated date of completion for the project is 2023. 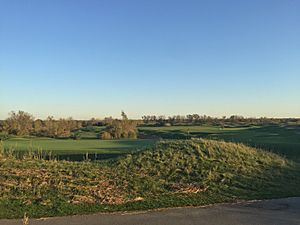 Munster has ten parks, three lakes, a nine-hole golf course and driving range, eleven miles of bike paths, an innovative public art and sculpture program, and two recreational points of interest. Centennial Park, the newest and largest of these facilities, was built on a former landfill and opened in 2007. This award-winning park incorporates several environmentally-friendly design elements conformant to the LEED Silver guidelines. Methane gas from the landfill is captured and converted into electricity to power the park. 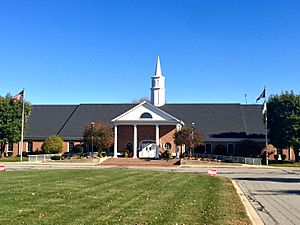 The School Town of Munster is the town's public school system. All five schools in the system are recognized as Indiana Blue Ribbon schools and have been awarded five-star ratings. Munster High School is one of several schools from Indiana on Newsweek's 2006, 2008, 2010, 2011, 2012, and 2013 Top Schools list. The school is also ranked on The Washington Post's 2011 "The High School Challenge". Additionally, Munster was cited by Neighborhood Scout for offering the best combination of public school quality and affordable neighborhoods in the Chicago Metropolitan Area.

In 1875, Munster's school board (which at the time was not officially designated School Town) operated a single three-room school house located on the corner of Calumet Avenue and Ridge Road. According to local records, enrollment did not exceed 50 students in any given year before 1920. In 1913, the school board decided to add a second school building due to increased enrollment. The new Munster school was dedicated in 1915. By the 1940s, the building had expanded to include twelve classrooms, a new gymnasium, and a 60-seat basement auditorium. The school was renamed Lanier School in 1950.

A new, modern facility was planned for the junior high students in the late 1950s. Wilbur Wright Junior High opened in 1960, causing Lanier to downsize to an elementary school. Several classrooms and a resource center were added in the following years. Amid the continuing expansion of the school system, the board gave serious consideration to adding a high school. The initial proposal encompassed a spacious building designed for 1,200 students and included an athletic facility with a swimming pool. However, the cost of more than $6.2 million did not appeal to the public. In response, a modified design was submitted, and construction began in June 1965. The doors to the new high school opened to students in September 1966.

In 1969, a new elementary school was added. Frank H. Hammond boasted 25 classrooms, an auditorium, and a learning center. When the outdated Lanier school's enrollment dipped in the late 1970s, the board decided to close the facility in 1980. 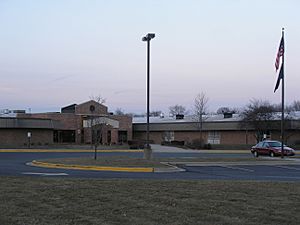 As of 2011, two of Munster's three elementary schools have since been completely rebuilt; the new buildings for James B. Eads Elementary and Earnest R. Elliot Elementary were completed in 2003 and 2006, respectively. Wilbur Wright Middle School has undergone significant expansions and renovations as well. Munster High School dedicated a state-of-the-art football, track and soccer complex in 2010, as well as a $17,000,000 Aquatic Center in January 2011. The latter facility is one of two scholastic aquatic centers in Indiana and the only one that is connected to a high school (the other is IUPUI's natatorium). In 2012, a two-story classroom addition was constructed at Munster High School to accommodate the growing student population.

The School Town of Munster implemented a curriculum/technology initiative termed 1 to 1 Technology for the 2011-2012 school year. Designed to enhance the school system's instructional technology infrastructure, the program provides leases on laptop computers to all students in grades 5-12. Initially focused on STEM fields curricula, the impact of the initiative is eventually expected to reach all subjects, and will better accommodate web-based student assessments.

Two private schools are located in Munster; St. Thomas More Parish added a school in 1949 and St. Paul's Lutheran school is located at 8601 Harrison Ave, and was founded in Hammond in 1886. The church and school moved to Munster in 1981.

All content from Kiddle encyclopedia articles (including the article images and facts) can be freely used under Attribution-ShareAlike license, unless stated otherwise. Cite this article:
Munster, Indiana Facts for Kids. Kiddle Encyclopedia.