Highland is a town in Lake County, Indiana, United States. The population was 23,727 at the 2010 census. The town was incorporated on April 4, 1910. It is a part of the Chicago metropolitan area and North Township, and is surrounded by Hammond to the north, Munster to the west, Schererville to the south and Griffith to the east. 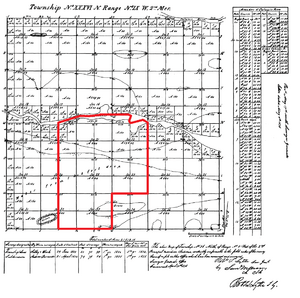 In 1847, two pioneers from Ohio, Michael and Judith Johnston, became Highland's first settlers. The town slowly expanded until the early 1880s, when the development of Chicago & Atlantic railroad trackage through the town attracted agriculture and manufacturing industries. Dutch settlers began moving to Highland shortly thereafter from nearby Munster. 304 people resided in Highland when it was incorporated in 1910. In 1992, the Indiana Historical Bureau placed a state historical marker at 8941 Kleinman Road (41°33′2″N 87°26′14″W﻿ / ﻿41.55056°N 87.43722°W﻿ / 41.55056; -87.43722) to recognize the immigration of Dutch in the Calumet Region.

In 1927, President Calvin Coolidge visited and delivered the dedication address for Wicker Memorial Park, located on the west side of the town. Highland, as with other towns along the Little Calumet River, has historically been subject to flooding, particularly during spring, and particularly in areas away from Ridge Road, which runs along the highest land in the town. Significant floods have affected Highland in 2008, 2007, and especially in September 2006.

On October 31, 2008, Barack Obama, who four days later would be elected the 44th President of the United States, stopped in Highland towns for a rally that drew 40,000 people to Wicker Park. It was the largest crowd there since President Coolidge dedicated the park in 1927. 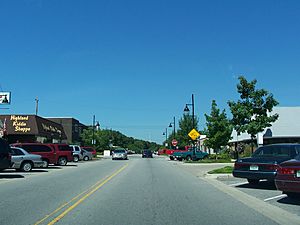 Highland lies just south of the Borman Expressway. U.S. Route 41, known locally as Indianapolis Boulevard, is a major north-south artery in the town. Due to Highland's proximity to Chicago, several other Interstate and U.S. highways are within a 20-mile (32 km) radius.

The town's pedestrians and cyclists are served by the Erie Lackawanna Trail, a cycling/multiuse, paved rail trail, which cuts diagonally through Highland, connecting the town with Griffith, and Crown Point, to the southeast. The Highland portion of the trail is also known locally as the Crosstown Trail. The trail runs along the former right-of-way of the Erie-Lackawanna and Baltimore and Ohio railroads, and will eventually connect pedestrians to Chicago, Illinois, to the northwest and beyond Crown Point to the southeast by planned trail extensions. The trail also links Highland, by connections with other trails, with Porter County to the east.

Wicker Memorial Park, at 8554 Indianapolis Boulevard, is owned and operated by the North Township trustee and was dedicated in 1927. Featured are a 72-par, 18-hole golf course, three miles of trails, volleyball and tennis courts, a dog run, playground, splash pad, picnic areas and banquet facilities.

The Hoosier Prairie State Nature Preserve, established in 1976, is a 1,547-acre wetland prairie habitat located in an area in the vicinity of Main Street and Kennedy Avenue and partially in Highland, Griffith and Schererville. It is a unit of the Indiana Dunes National Lakeshore and managed by the Indiana Department of Natural Resources.

Highland Parks and Recreation operates the Lincoln Community Center, Sharp Athletic Complex and the four-mile Erie-Lackawanna Trail. The Main Square Park Gazebo is a popular site for wedding ceremonies as well as a number of community events and festivals during the year. In addition to Homestead, Markley, Meadows and Sheppard parks, which offer shelters for picnics and gatherings, there are 16 other parks maintained with various amenities throughout the town.

List of parks and recreational facilities – Highland Parks and Recreation

The School Town of Highland is the town's public school system, which operates Highland High School, which was established in 1957, as well as a middle school and four elementary schools. The area where the former Main School once stood is marked by a gazebo, which was demolished in October 2006 and rebuilt in 2007. It and the surrounding land are named Main Square Park after the now-defunct school that stood on the site until 1977. One of the other defunct schools, Lincoln Elementary, was converted into a community center in the early 1980s. The other, Orchard Park Elementary, closed in 1981 and was later purchased and reopened as a Calumet Baptist School in the early 1990s.

Highland also contains three private schools. Highland Christian School was founded in 1909 and has been in its present building and location since 1951. Our Lady of Grace School was founded in 1954 and is run by the Diocese of Gary. There is also Bible Baptist School that operates on the site of the former Orchard Elementary School.

All content from Kiddle encyclopedia articles (including the article images and facts) can be freely used under Attribution-ShareAlike license, unless stated otherwise. Cite this article:
Highland, Lake County, Indiana Facts for Kids. Kiddle Encyclopedia.