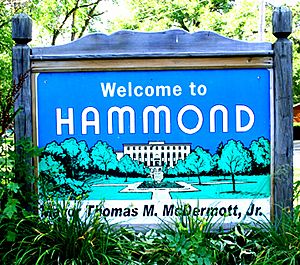 There were 29,949 households of which 36.2% had children under the age of 18 living with them, 37.0% were married couples living together, 19.7% had a female householder with no husband present, 7.5% had a male householder with no wife present, and 35.8% were non-families. 30.3% of all households were made up of individuals and 9.7% had someone living alone who was 65 years of age or older. The average household size was 2.67 and the average family size was 3.36.

The first permanent residents arrived around 1847 to settle on land between the Grand and Little Calumet rivers, on the south end of Lake Michigan. Those first residents were German farmers newly arrived from Europe looking for land and opportunity. Before that time, the area was a crossroad for Indian tribes, explorers, stagecoach lines and supply lines to the West. Convenient location and abundant fresh water from Lake Michigan led to the beginning of Hammond's industrialization in 1869 with the George H. Hammond Company meat-packing plant following merchants and farmers to the area. Hammond was incorporated on April 21, 1884, and was named after the Detroit butcher. Hammond is one of the oldest cities in Lake County, with Crown Point being the oldest, established in 1834. According to the Encyclopedia of Chicago, George Henry Hammond, a pioneer in the use of refrigerated railcars for the transport of fresh meat, first used this method with his small packing company in Detroit, Michigan. In 1868, Hammond received a patent for a refrigerator car design. In the early 1870s, he built a new plant in northern Indiana along the tracks of the Michigan Central Railroad. By 1873, the George H. Hammond Co. was selling $1 million worth of meat a year; by 1875, sales were nearly $2 million. The company's large packing house in Hammond—the town had taken the name of its most powerful resident—rivaled those located at the Union Stock Yard in Chicago. By the middle of the 1880s, when it built a new plant in Omaha, Nebraska, Hammond was slaughtering over 100,000 cattle a year and owned a fleet of 800 refrigerator cars. After Hammond died in 1886, the company became less important and no longer challenged the giant Chicago packers, who acquired Hammond at the turn of the century and merged it into their National Packing Co.

According to the 1960 U.S. Census Hammond's population reached a record high of 111,698 residents.

The following single properties and national historic districts are listed on the National Register of Historic Places:

According to the city, those businesses employing 200 or more employees in Hammond are:

All content from Kiddle encyclopedia articles (including the article images and facts) can be freely used under Attribution-ShareAlike license, unless stated otherwise. Cite this article:
Hammond, Indiana Facts for Kids. Kiddle Encyclopedia.