Calumet City (commonly referred to locally as "Cal City") was founded in 1893 when the villages of Schrumville and Sobieski Park merged under the name of West Hammond, since it lies on the west side of the Illinois-Indiana line from Hammond, Indiana. In 1924, West Hammond officially became Calumet City after its citizens voted to change the name in 1923.

In addition to being bordered to the east by Hammond, it is also bordered by Burnham and Chicago to the north, Lansing to the south, and South Holland and Dolton to the west.

A landmark and point of pride among Cal City residents is the pair of large water towers painted like the popular "Have a Nice Day" smiley faces. 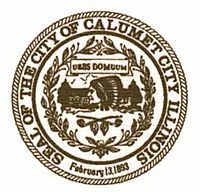 Calumet City is featured or mentioned in a number of major movies. John Belushi's "Joliet Jake" and Dan Aykroyd's "Elwood" characters from The Blues Brothers were born in Calumet City, and so is the orphanage they grew up in which they save "on a mission from God" by paying $5000 in property taxes from a $10,000 record deal at their concert, as well as "Ray's Music Exchange" that holds the famed Ray Charles "Shake Your Tail-Feather" scene of the movie, which was a tribute to Calumet City's Hegewisch Records Store. In the book and film The Silence of the Lambs, Buffalo Bill is thought to be hiding in Calumet City, when he is actually in Belvedere, Ohio. The Calumet City scenes in the film were filmed in Pittsburgh, Pennsylvania, however. Lily Tomlin's prim but assertive housewife/spokesperson "Mrs. Judith Beasley" is said to be a resident of Calumet City. She said, "Hi. I am not an actress, but a real person like yourself."

Calumet City is also referenced by a number of popular music acts. The Black Crowes included a video of the Smiley Towers in their 1990 video for "Hard to Handle". A photograph of the "Dolton" smiley water tower is featured on the back of the Dead Kennedys album Plastic Surgery Disasters. Rapper Twista has referenced Calumet City. Kanye West's reference to Calumet in his 2005 song "Drive Slow" does not refer to Calumet City, but rather to Calumet High School, which was located in the South Side of Chicago and not in Calumet City.

The Smiley Tower is also featured in the movie Natural Born Killers; it is seen out the window of Mallory's family home (part of that movie was filmed in Hammond, Indiana). In the Nine Inch Nails music video on the director's cut of the same film, the Smiley Tower and Dolton Avenue/State Street is featured.

The founders of the Calumet Baking Powder Company adopted its brand name from the original Native American word for the land that became Calumet City. They later named one of thoroughbred horse racing's most famed and successful enterprises, Calumet Farm, after the company.

In 2004, Alan Keyes purchased a raised ranch house in Calumet City to establish residency in Illinois so he could run for the U.S. Senate in place of Jack Ryan against Barack Obama, although instead of residing in the house, he officially moved into an apartment elsewhere in town, on Garfield Avenue.

In 2010, pop music group Hanson remade the "Shake Your Tailfeather" scene of the movie "The Blues Brothers" for the music video for their hit "Thinkin' 'Bout Somethin'" in Tulsa, Oklahoma, paying homage to Calumet City's Ray's Music Exchange, John Belushi, and Ray Charles.

Jean Shepherd (writer and narrator of the classic movie "A Christmas Story") in radio broadcasts from WOR radio, New York in the 1950s, 1960s and 1970s and in his PBS specials of the 1970s and 1980s, and his many books, often refers to it as Cal City or just Calumet. He grew up next door in Hammond, Indiana.

All content from Kiddle encyclopedia articles (including the article images and facts) can be freely used under Attribution-ShareAlike license, unless stated otherwise. Cite this article:
Calumet City, Illinois Facts for Kids. Kiddle Encyclopedia.