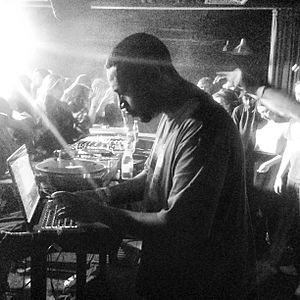 Rashad Hanif Harden (October 9, 1979 – April 26, 2014), better known by his stage name DJ Rashad, was an American electronic musician, record producer and DJ. He started his career in the early 1990s. He was best known for his work in the footwork genre. He worked with Hyperdub Records and artists such as DJ Spinn. He was born in Hammond, Indiana and was raised in Calumet City, Illinois.

All content from Kiddle encyclopedia articles (including the article images and facts) can be freely used under Attribution-ShareAlike license, unless stated otherwise. Cite this article:
DJ Rashad Facts for Kids. Kiddle Encyclopedia.