Whiting is a city located in the Chicago Metropolitan Area in Lake County, Indiana, which was founded in 1889. The city is located on the southern shore of Lake Michigan. It is roughly 16 miles from the Chicago Loop and two miles from Chicago's South Side. Whiting is home to Whiting Refinery, the largest oil refinery in the Midwest. The population was 4,997 at the 2010 census.

A post office was first established at Whiting in 1871. Whiting was incorporated in 1895.

The Hoosier Theater Building and Whiting Memorial Community House are listed in the National Register of Historic Places.

The Whiting post office (46394) serves not only the city of Whiting, but also the adjacent Hammond neighborhood of Robertsdale, immediately to the west. Addresses in this Hammond neighborhood show “Whiting, Indiana.” While not legally a part of the city of Whiting, locally the area has long been informally considered to be a culturally integrated part of Whiting. References to Whiting businesses or residents often include those technically from Hammond’s Robertsdale. 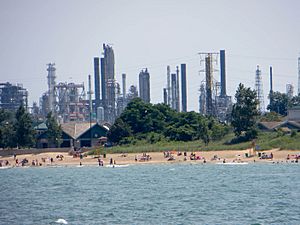 Whiting is home to five parks. Whiting Park, located on the Lake Michigan shoreline, is the most well known. It is a popular picnic spot for residents of Lake County, the South Side of Chicago, and Southland. Whihala Beach is located next to Whiting Park between Whiting and neighboring Hammond. 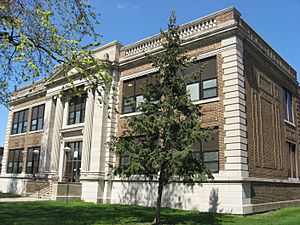 School City of Whiting serves Whiting. Whiting High School is the sole public high school serving Whiting. The city is also home to a historic Carnegie Library, built in 1905. Whiting Public Library is located at 1735 Oliver Street. Calumet College of St. Joseph is a private college affiliated with the Roman Catholic Church through the Missionaries of the Precious Blood. Its main campus is in Whiting, Indiana, with additional campuses located in Chicago, Illinois, and Merrillville, Indiana. The college was founded in 1951 as an extension of the now defunct Saint Joseph's College in Rensselaer, Indiana and currently enrolls 1,262 students.

Amtrak's Wolverine line stops at Hammond–Whiting station in nearby Hammond.

All content from Kiddle encyclopedia articles (including the article images and facts) can be freely used under Attribution-ShareAlike license, unless stated otherwise. Cite this article:
Whiting, Indiana Facts for Kids. Kiddle Encyclopedia.