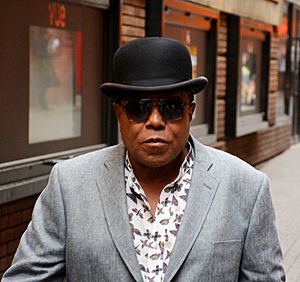 Toriano Adaryll "Tito" Jackson (born October 15, 1953) is an American singer and guitarist. He is the third child of Joe and Katherine Jackson. He is a member of the pop band The Jackson 5, who reformed in 2012. With The Jacksons he has had four US number one singles. He has three sons, Taryll, TJ, and Taj. They make up the pop band 3T. He recorded five songs for a solo album but it was never released. But in 2011 he released a single, "We Made It". He was in the 2009 TV series The Jacksons: A Family Dynasty with his brothers Jermaine, Jackie, and Marlon. 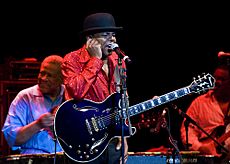 Jackson's father Joe bought him a guitar when he was 8 years old. Joe made Tito and his brothers Jackie and Jermaine into a group called The Jackson Brothers. Later Marlon and Michael joined. The group's name was changed to The Jackson 5. They were signed to Steeltown Records. The label released the group's first single "Big Boy". They were signed to Motown Records in 1968. Their first single on the label, "I Want You Back", reached number one in the United States. The band went on to sell 150 million records.

All content from Kiddle encyclopedia articles (including the article images and facts) can be freely used under Attribution-ShareAlike license, unless stated otherwise. Cite this article:
Tito Jackson Facts for Kids. Kiddle Encyclopedia.