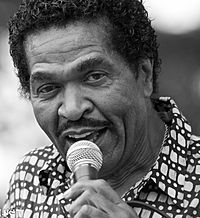 Bobby Rush (born November 10, 1933) is a Grammy Award Winning American blues musician, composer and singer. His style is made of elements of blues, rap and funk. He was born in Homer, Louisiana, but was raised in Pine Bluff, Arkansas and in Chicago, Illinois.

In 2007, he became the first blues artist to perform in China, earning him the title “International Dean of the Blues.” He was later named Friendship Ambassador to the Great Wall of China after performing the largest concert ever held at that site.

Rush has been awarded 17 blues music awards in his lifetime, and in 2006 he was added into the Blues Hall of Fame.

The Grammy Awards are awarded annually by the National Academy of Recording Arts and Sciences. Rush has won one award from four nominations.

All content from Kiddle encyclopedia articles (including the article images and facts) can be freely used under Attribution-ShareAlike license, unless stated otherwise. Cite this article:
Bobby Rush (musician) Facts for Kids. Kiddle Encyclopedia.