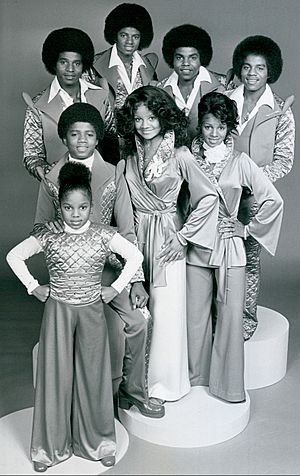 Maureen Reillette "Rebbie" Jackson (born May 29, 1950 in Gary, Indiana) is an American singer. She is the eldest of the Jackson siblings.

She began performing on stage in 1974 and later appeared in the television program "The Jacksons". In 1984 Rebbie released her debut album Centipede, her most successful album. The single "Centipede" reached number 4 in the US R&B chart. It has backing vocals from siblings La Toya and Michael Jackson and The Weather Girls. In 1976 she was in the TV series The Jacksons. It was the first TV show starring an African-American family. She then released two more albums in the 1980s and then went on hiatus, returning in 1998 with Yours Faithfully. She has not had an album released since 1998.

She married Nathaniel Brown in 1968. He died in 2013 of cancer. They have three children, Austin, Stacee (who has Jackson's only grandchild, London), and Yashi Brown.

All content from Kiddle encyclopedia articles (including the article images and facts) can be freely used under Attribution-ShareAlike license, unless stated otherwise. Cite this article:
Rebbie Jackson Facts for Kids. Kiddle Encyclopedia.