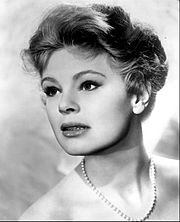 Betsy Palmer (born Patricia Betsy Hrunek; November 1, 1926 – May 29, 2015) was an American actress, best known as a regular panelist on the game show I've Got a Secret, and later for playing Pamela Voorhees in the slasher movie Friday the 13th.

Palmer was born on November 1, 1926 in East Chicago, Indiana. She was of Czech descent. Palmer was raised in Chicago, Illinois. She studied at DePaul University. Palmer was married to Vincent J. Merandino from 1954 until they divorced in 1971. They had one daughter.

All content from Kiddle encyclopedia articles (including the article images and facts) can be freely used under Attribution-ShareAlike license, unless stated otherwise. Cite this article:
Betsy Palmer Facts for Kids. Kiddle Encyclopedia.