Woodstock is a city in (and the county seat of) McHenry County, Illinois, United States. It is located 41 miles (66 km) northwest of Chicago making it one of the city's outer-most suburbs. As of 2019 the city's population was 25,240. The city's historic downtown district and turn-of-the-century town square is anchored by the landmark Woodstock Opera House and the Old McHenry County Courthouse. In 2007 Woodstock was named one of the nation's Dozen Distinctive Destinations by the National Trust for Historic Preservation. 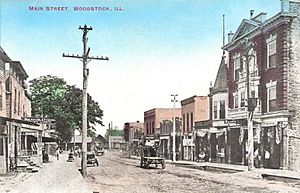 Centerville, as Woodstock was originally called, was chosen as the county seat on September 4, 1843, due to its location at the geographic center of McHenry County. Early area settler Alvin Judd developed a plat for the town, incorporating a two-acre public square, near which a 2-story frame courthouse and jail were constructed the following year by George C. Dean and Daniel Blair. In 1845, resident Joel Johnson proposed that Centerville be given a more original name, and so the town was renamed Woodstock after Johnson's hometown of Woodstock, Vermont. (The town was listed as "Center" on the 1850 Federal Census, however.) In 1852, Woodstock was incorporated as a village with Judd as president. In response to a burgeoning population following the Civil War, Woodstock was incorporated as a city in 1873. John S. Wheat was elected as Woodstock's first mayor. A vital artery for the growing town was the train line to and from Chicago, which allowed for a substantial industrial presence early in the town's history. 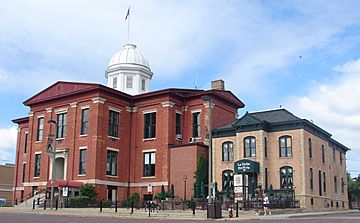 In 1895, Eugene V. Debs served out a short federal prison sentence in the Woodstock Jail following the 1894 Pullman labor strike in Chicago. Debs, the former president of the American Railway Union, was held in Woodstock instead of Chicago because federal officials feared that he would be surrounded with too many sympathizers in a Chicago prison and therefore could have still incited further violence. Debs was instead assigned to a cell in the newly constructed Woodstock Jail, which occupied the lowest floor of the Woodstock Courthouse on the town square. During his time in jail, Debs received several influential socialist visitors and encountered the works of Karl Marx. He is said to have considered the Woodstock Jail one of the "greatest school[s]," and passed his time reading and writing many letters from his cell. By the time he was released in November 1895 (to great fanfare and before crowds of onlookers assembled in the Woodstock Square), Debs had become a socialist and a national celebrity. He later ran for the United States Presidency five times between 1900 and 1920 as the candidate for the newly formed Social Democratic Party. 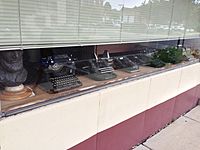 Typewriters in a Woodstock business' window in 2013. Note the name "Woodstock" on some of them.

During the early part of the 20th century, Woodstock had become "Typewriter City." Home to the factories of both the Emerson Typewriter Company and the Oliver Typewriter Company, Woodstock workers had built more than half the world's typewriters by 1922. The companies were very much a part of life in the city during this time. Both factories had active social clubs, baseball teams that competed against one another, and Emerson even had a well-regarded band that played at public events. In 1919, Emerson Typewriter became the Woodstock Typewriter Company. The city grew and flourished with increasing demand for Woodstock typewriters up through and after World War II. Initially the company sold typewriters for use in the war effort domestically and abroad, but even after the war's end returning servicemen, now familiar with the Woodstock brand, chose these models for their households. The factory was in use until 1970, and has since been converted into lofts.

Orson Welles and the Todd School for Boys

Woodstock had an important role in the creative development of Orson Welles. In 1926 at age 10, in the midst of a chaotic upbringing, he enrolled at the Todd School for Boys in Woodstock. His five-year stay there was his only education, but the town and school made an impression on the young Welles. Years later, in 1960, when asked where he thought of as his hometown, he replied "I suppose it's Woodstock, Illinois, if it's anywhere. I went to school there for four years. If I try to think of a home, it's that."

At Todd School, the young Welles came under the positive influence and guidance of Roger Hill, a teacher who later became the school's headmaster. Hill provided Welles with an educational environment that supported his creativity, allowing Welles to concentrate on subjects that interested him. Welles performed and staged his first theatrical experiments and productions at Todd. He also performed at the downtown Woodstock Opera House, where the stage — the site of his American debut as a professional theatre director — is now dedicated to him. Welles returned to Woodstock periodically after leaving school. In July 1934 at the age of 19, he coordinated the Todd Theatre Festival, a six-week summer festival at the Woodstock Opera House that featured Hilton Edwards and Micheál MacLiammóir of Dublin's Gate Theatre. His short film The Hearts of Age was shot on the Todd School campus during the festival.

Todd School for Boys closed in 1954, and several original buildings were purchased at auction and reused by Marian Central Catholic High School and Christian Life Services. Welles' former dormitory was demolished in 2010.

Woodstock is perhaps most famous for its role as the location for the 1993 movie Groundhog Day, starring Bill Murray. Although the story is set in Punxsutawney, Pennsylvania, the movie's producers preferred the quintessentially American backdrop of the Woodstock Square and its surroundings. Outdoor and street scenes were filmed around the downtown and various side streets, and signs from stores and businesses are visible throughout the movie. Many notable scenes' locations are commemorated with plaques as part of a walking tour for visitors and enthusiasts. Additionally, the bed and breakfast in which Bill Murray's character stays is a few blocks from the Square and was formerly a private residence, but in recent years it has been opened as a functioning bed and breakfast where visitors can stay.

Several scenes in the 1987 film Planes, Trains, and Automobiles were shot in Woodstock, including the scene in which the protagonists' rental car is towed in front of a building (the old Courthouse). The movie brought Woodstock to the attention of location manager Bob Hudgins, who later recommended the town to Harold Ramis for the filming of Groundhog Day. 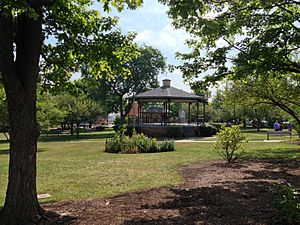 The bandstand in the center of the Woodstock Square

The Woodstock Independent is the award-winning local paper of record and is delivered weekly to subscribers. Published on Wednesdays, The Independent covers community news, events as well as local government and schools. The Independent also publishes The Torch, a feature-oriented magazine delivered free to all Woodstock residents 8 or 9 times a year.

Woodstock has become an important destination for live music in McHenry County and the region with venues featuring local, national, and international artists.

A number of organizations support and promote live music in Woodstock:

Woodstock is home to many Protestant and Catholic churches, a Jewish congregation and a Buddhist temple. The Blue Lotus Buddhist Temple, founded in 2002 by Bhante Sujatha, is an internationally recognized Sri Lankan Buddhist Temple and draws people from much of northern Illinois and southern Wisconsin. 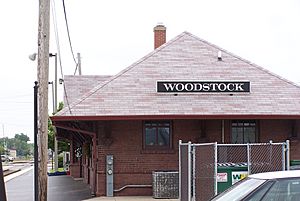 Woodstock's railroad station is the penultimate passenger stop on Metra's Union Pacific Northwest Line, which originates from Ogilvie Transportation Center in downtown Chicago and ends in Harvard, Illinois. At Woodstock, Metra offers passengers 9 daily trains to Chicago on weekdays (11 returning outbound), and between 400 and 500 daily passengers use the train for travel to Chicago or other suburban communities along the line. This direct link to the city was historically instrumental in Woodstock's growth as a city, and remains an attractive option for local commuters and residents to reach Chicago. As a result, Woodstock's use of the system is greater than that of nearly half of the Metra system's other outlying stations, many of which serve larger or geographically nearer communities. 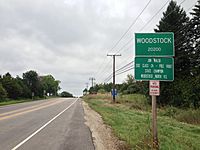 There were 7,273 households, out of which 37.5% had children under the age of 18 living with them, 52.7% were married couples living together, 9.7% had a female householder with no husband present, and 33.4% were non-families. 27.3% of all households were made up of individuals, and 9.2% had someone living alone who was 65 years of age or older. The average household size was 2.68 and the average family size was 3.30. 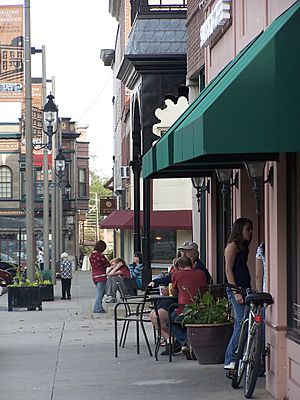 According to Woodstock's 2018 Comprehensive Annual Financial Report, the top employers in the city are:

All content from Kiddle encyclopedia articles (including the article images and facts) can be freely used under Attribution-ShareAlike license, unless stated otherwise. Cite this article:
Woodstock, Illinois Facts for Kids. Kiddle Encyclopedia.