Peele directed and wrote the 2017 horror movie Get Out, for which he won an Academy Award for Best Original Screenplay.

Peele was born in New York and raised by a single mother on the Upper West Side of Manhattan. He graduated from the Calhoun School and attended Sarah Lawrence College in Yonkers, New York. He dropped out of college after two years to pursue comedy.

Peele joined the cast of the sketch comedy show Mad TV in 2003. He became friends with fellow cast member Keegan Michael-Key. The two became a comedy duo, and later co-starred in their own sketch show, Key & Peele. 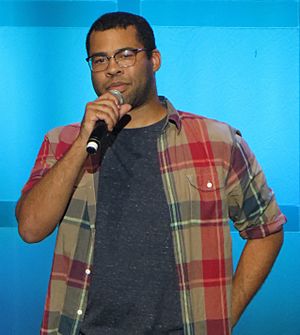 All content from Kiddle encyclopedia articles (including the article images and facts) can be freely used under Attribution-ShareAlike license, unless stated otherwise. Cite this article:
Jordan Peele Facts for Kids. Kiddle Encyclopedia.