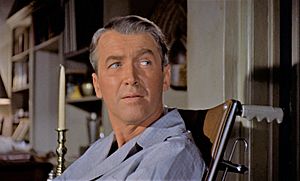 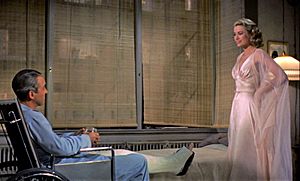 Rear Window is a 1954 American suspense movie directed by Alfred Hitchcock. The movie was based on a story, It Had To Be Murder, by Cornell Woolrich and turned into a movie script by John Michael Hayes. The movie was nominated for four Academy Awards. It stars James Stewart, Grace Kelly, Wendell Corey, Thelma Ritter and Raymond Burr.

The movie tells the story of a photographer (played by James Stewart) who has a broken leg. He spends his days sitting in his Greenwich Village apartment watching his neighbors through their windows. One day, after he thinks he sees a murder, his girlfriend (played by Grace Kelly) helps him to investigate.

All content from Kiddle encyclopedia articles (including the article images and facts) can be freely used under Attribution-ShareAlike license, unless stated otherwise. Cite this article:
Rear Window Facts for Kids. Kiddle Encyclopedia.