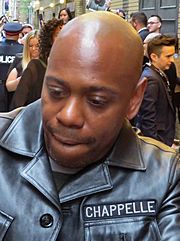 David Khari Webber "Dave" Chappelle (born August 24, 1973) is an American comedian, screenwriter, television and movie producer, movie, voice, and television actor, and artists. He is known for his comedy works and for having his own show, Chappelle's Show. He is also known for his role as Thurgood Jenkins in Half Baked. In 2018, he starred as Noodles in the drama movie A Star Is Born.

In 2016, he signed a $20 million-per-release comedy-special deal with Netflix and as of 2019, he has released five standup specials.

Chappelle received his first Emmy Award in 2017 for his guest appearance on Saturday Night Live. In 2018, he received a Grammy Award for his Netflix specials The Age of Spin & Deep in the Heart of Texas.

Chappelle was born on August 24, 1973 in Washington, D.C., but raised in Silver Spring, Maryland. He has been married to Elaine Erfe since 2001. They have 3 children.

In 2019, Chappelle was selected to receive the Mark Twain Prize for American Humor presented by the Kennedy Center as America's highest comedy honor.

All content from Kiddle encyclopedia articles (including the article images and facts) can be freely used under Attribution-ShareAlike license, unless stated otherwise. Cite this article:
Dave Chappelle Facts for Kids. Kiddle Encyclopedia.