Xenia ( zee-NEE-ə) is a city in southwestern Ohio and the county seat of Greene County, Ohio, United States. It is 15 miles (24 km) east of Dayton and is part of the Dayton Metropolitan Statistical Area, as well as the Miami Valley region. The name comes from the Greek word Xenia (ξενία), which means "hospitality".

As of the United States Census 2020, the city had a population of 25,441. As of the United States Census 2010, Xenia is the third-largest city by population in Greene County, behind Fairborn and Beavercreek. At the geographical center of the county, it is the county seat and houses the County Courthouse, County Sheriff's Department, Jail, and other regional departments.

Xenia was founded in 1803, the year Ohio was admitted into the Union. In that year, pioneer John Paul bought 2,000 acres (8.1 km2) of land from Thomas and Elizabeth Richardson of Hanover County, Virginia, for "1050 pounds current moneys of Virginia." Paul influenced county commissioners to locate the county seat on this land at the forks of the Shawnee Creeks.

Joseph C. Vance was named to survey the site and lay out the town. The following year, he bought the town site of 257 acres (1.04 km2) from John Paul for $250. The name of the new village was chosen in typically democratic fashion. Vance called a town meeting to discuss possible names. The committee had considered several suggestions without reaching any decision. Then the Rev. Robert Armstrong proposed the name "Xenia," meaning "hospitality" in Greek, because of the fine hospitality extended to him in this friendly community. When a tie vote occurred, Laticia Davis, wife of Owen Davis, was invited to cast the deciding ballot. She voted for "Xenia."

The first session of the Ohio General Assembly created Greene County from the Northwest Territory, embracing the homeland of the Shawnee Indians. Their chief tribal village was north of Xenia at Old Chillicothe, now called Old Town. The Shawnee war chief Tecumseh was born there in 1768.

Xenia was incorporated by an act of the legislature in 1817 and became a city in 1834. However, it was the arrival of the Little Miami Railroad (now the site of the Little Miami Scenic Trail, which passes through Xenia Station) in 1843 which gave the city its first industrial impetus. On March 2, 1850 the Ohio General Assembly rode from Columbus, Ohio to Xenia and back on the newly completed Columbus and Xenia Railroad.

President-Elect Abraham Lincoln made a brief appearance in the city as his inaugural train traveled from Cincinnati to Columbus on Wednesday morning, February 13, 1861. He gave a short speech which was not recorded by a traveling writer from the New York Times as it echoed the same sentiments that he had expressed before in his previous stops. According to the Times writer, "a very large crowd assembled, and amid the firing of a cannon and enthusiasm, Mr. Lincoln addressed them from the rear car, reiterating what he had said before.".

The town progressed rapidly during the mid-19th century. Artificial gas was provided in the 1840s and continued in use until natural gas was made available in 1905. The first fire engine house was built in 1831; the telephone came to Xenia in 1879; electricity in 1881 and a water works system in 1886. Xenia opened its first free public library in 1899. By 1900 the city was operating its own sewage system.

Xenia elected Cornelius Clark as its first mayor in 1834. On January 1, 1918, the current commission-manager plan succeeded the old form of municipal government.

Xenia has a history of severe storm activity. According to local legend, the Shawnee Indians referred to the area as "the place of the devil wind" or "the land of the crazy winds" (depending upon the translation). Records of storms go back to the early 19th century. Local records show 20 tornadoes in Greene County since 1884. 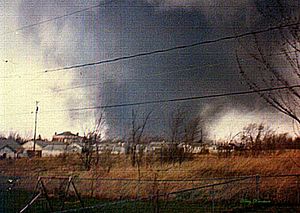 On April 3, 1974 a tornado rated F5 on the Fujita scale cut a path directly through the middle of Xenia during the 1974 Super Outbreak, the second largest series of tornadoes in recorded history. The disaster killed 34 people (including two Ohio National Guardsmen who died days later in a related fire), injured an additional 1,150, destroyed almost half of the city's buildings, and left 10,000 people homeless. Five schools, including Xenia High School, Central Junior High School, McKinley Elementary, Simon Kenton Elementary, and Saint Brigid Catholic School were destroyed, as were nine churches and 180 businesses.

The city's plight was featured in the national news, including a 1974 NBC television documentary, Tornado!, hosted by Floyd Kalber. President Richard Nixon visited stricken areas of Xenia following the devastation. Comedian Bob Hope organized a benefit for Xenia and, in appreciation, the new Xenia High School Auditorium was named the "Bob Hope Auditorium." In recognition of their coverage of this tornado, the staff of the Xenia Daily Gazette won the Pulitzer Prize for Spot News Reporting in 1975.

Xenia currently has a system of tornado sirens. After the 1974 tornado outbreak, the city purchased a system of Federal Signal Thunderbolt Sirens for warning. During the 2000 tornado strike, the lack of backup power silenced the sirens, so the city purchased Federal Signal 2001-SRN series sirens with battery backup. Most of Xenia's old sirens are still standing, but not operational. 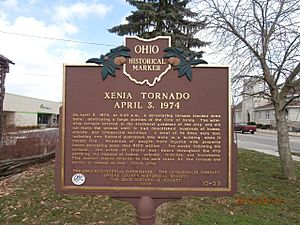 Xenia originally hosted several lines owned by the Baltimore & Ohio (B&O) and Pennsylvania (PRR) railroads. All lines have since been abandoned, the last being dismantled by 1989.

The lines that previously served Xenia were:

The roadbeds of five of Xenia's six rail lines were converted for rail trail use. The one exception — the B&O line west of town — was not converted because it closely paralleled the PRR mainline for most if its length. The large number of rail trails resulted in Xenia being referred to as the Bicycle Capital of the Midwest.

Xenia was also served by two interurban railways until the 1940s:

Xenia is centrally located in the "transportation triangle" formed by three major interstate highways: I-70, I-71, and I-75. These north-south, east-west arteries are within minutes of Xenia via U.S. Routes 35, 42, and 68, tying the community to one of the nation's largest 90-minute highway markets. Before the creation of the U.S. Interstate Highway system, U.S. 68 was one of the main southward routes from Detroit, Michigan. Within Xenia, U.S. 68 is named "Detroit Street".

Xenia has, or once had, the following industries:

Xenia has the main branch library and administrative offices of the Greene County Public Library.

All content from Kiddle encyclopedia articles (including the article images and facts) can be freely used under Attribution-ShareAlike license, unless stated otherwise. Cite this article:
Xenia, Ohio Facts for Kids. Kiddle Encyclopedia.