Pete Seeger (Peter Seeger; May 3, 1919 – January 27, 2014) was an American folk musician and songwriter. He was a longtime friend of Woody Guthrie, and founder of The Almanac Singers and The Weavers, two famous folk bands. Seeger's usual musical instrument is a banjo.

Seeger was born Peter Seeger on May 3, 1919 in Manhattan, New York City. His parents were Protestants. His parents enrolled him at Avon Old Farms Boarding School in Avon, Connecticut. Seeger studied for a short while at Harvard University. He soon dropped out. In 1943, Seeger married his wife Toshi Aline. 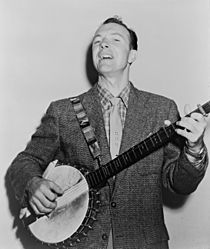 He organized or played at many benefit concerts, to help people who had been hurt by bad business practices or governmental policies, or sometimes by disasters. He also wrote songs to promote the things he believed in, and to protest things he opposed.

Seeger was a leftist, not afraid to speak his views openly, or to support unpopular causes such as Communism. Seeger's musical career was sometimes limited by his views. The American Federal Bureau of Investigation kept a dossier on Seeger, and the House Un-American Activities Committee put pressure on him, because of his beliefs. He refused to change his views, or to stop doing what he believed was right. Because of this, Seeger was blacklisted in many places, and could not play music there. He was also not allowed to appear on television for most of the 1950s and 1960s.

One rare appearance, on the Smothers Brothers Comedy Hour, was censored because the song he played, "Waist Deep In The Big Muddy", was an allegory against the Vietnam War, which most Americans supported at the time.

Seeger's original songs include "Where Have All The Flowers Gone?", "The Hammer Song" (also called "If I Had A Hammer"), and "Turn, Turn, Turn", whose words were adapted from Ecclesiastes in the Bible. Other musicians played and recorded his songs, including Judy Collins, Peter, Paul and Mary, and The Byrds. Seeger started Broadside, a magazine devoted to folk music, and also Sing Out! to promote music and singing by the public.

As years went by, social trends changed in America, and Seeger's views became more acceptable. He was finally able to make television appearances, and was admired for his dedication to folk music, and to causes. He played music together with Arlo Guthrie, the son of Woody Guthrie, performing Woody's old songs and others. He received awards for his music, including the American National Medal for the Arts, and a Kennedy Center Honor. He was also inducted into the Songwriters Hall of Fame, and even the Rock and Roll Hall of Fame, as an influence to rock musicians.

Seeger and Toshi had four children. He was an active as a musician and as a spokesperson for important matters, like the environment, alternative fuels, and people who need a champion to support them. His wife Toshi Seeger died on July 9, 2013. Seeger lived in New York City.

Seeger died in New York City on January 27, 2014, of natural causes, aged 94. His remains were cremated.

All content from Kiddle encyclopedia articles (including the article images and facts) can be freely used under Attribution-ShareAlike license, unless stated otherwise. Cite this article:
Pete Seeger Facts for Kids. Kiddle Encyclopedia.