Ridgefield is a town in Fairfield County, Connecticut, United States. Situated in the foothills of the Berkshire Mountains, the 300-year-old community had a population of 24,638 at the 2010 census. The town center, which was formerly a borough, is defined by the U.S. Census Bureau as a census-designated place. 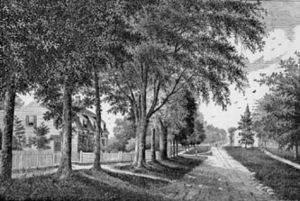 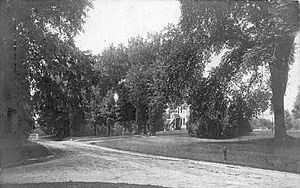 Ridgefield was first settled by English colonists from Norwalk and Milford in 1708, when a group of settlers purchased land from Chief Catoonah (also known as Chief Katonah) of the Ramapo tribe. The town was incorporated under a royal charter from the Connecticut General Assembly issued in 1709. The most notable 18th-century event was the Battle of Ridgefield on April 27, 1777. This American Revolutionary War skirmish involved a small colonial militia force (state militia and some Continental Army soldiers), led by, among others, General David Wooster, who died in the engagement, and Benedict Arnold, whose horse was shot from under him. They faced a larger British force that had landed at Westport and was returning from a raid on the colonial supply depot in Danbury. The battle was a tactical victory for the British but a strategic one for the Colonials because the British would never again conduct inland operations in Connecticut, despite western Connecticut's strategic importance in securing the Hudson River Valley. Today, the dead from both sides are buried together in a small cemetery on Main Street on the right of the entrance to Casagmo condominiums: "...foes in arms, brothers in death...". The Keeler Tavern, a local inn and museum, features a British cannonball still lodged in the side of the building. There are many other landmarks from the Revolutionary War in the town, with most along Main Street.

In the summer of 1781, the French army under the Comte de Rochambeau marched through Connecticut, encamping in the Ridgebury section of town, where the first Catholic mass in Ridgefield was offered.

For much of its three centuries, Ridgefield was a farming community. Among the important families in the 19th century were the Rockwells and Lounsburys, which intermarried. They produced two Connecticut governors, George Lounsbury and Phineas Lounsbury. The Ridgefield Veterans Memorial Community Center on Main Street, also called the Lounsbury House, was built by Gov. Phineas Chapman Lounsbury around 1896 as his primary residence. The Lounsbury Farm near the Florida section of Ridgefield is one of the only remaining operational farms in Ridgefield.

In the late 19th century, spurred by the new railroad connection to its lofty village and the fact that nearby countryside reaches 1,000 feet (300 m) above sea level, Ridgefield began to be discovered by wealthy New York City residents, who assembled large estates and built huge "summer cottages" throughout the higher sections of town. Among the more noteworthy estates were Col. Louis D. Conley's "Outpost Farm", which at one point totalled nearly 2,000 acres (8.1 km2), some of which is now Bennett's Pond State Park; Seth Low Pierrepont's "Twixthills", more than 600 acres (2.4 km2), much of which is now Pierrepont State Park; Frederic E. Lewis's "Upagenstit", 100 acres (0.40 km2) that became Grey Court College in the 1940s, but is now mostly subdivisions; and Col. Edward M. Knox's "Downesbury Manor", whose 300 acres (1.2 km2) included a 45-room mansion that Mark Twain often visited. 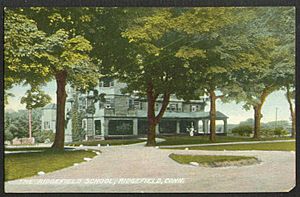 The Ridgefield School (postcard sent in 1909)

These and dozens of other estates became unaffordable and unwieldy during and after the Great Depression, and most were broken up. Many mansions were razed. In their place came subdivisions of one- and 2-acre (8,100 m2) lots that turned the town into a suburban, bedroom community in the 1950s, 1960s, and 1970s. However, strong planning and zoning has maintained much of the 19th- and early 20th-century charm of the town, especially along its famous mile-long Main Street.

In 1946, Ridgefield was one of the locations considered for the United Nations secretariat building, but was not chosen due to its relative inaccessibility.

According to the United States Census Bureau, the town has a total area of 35.0 square miles (91 km2), of which 34.4 square miles (89 km2) is land and 0.5 square miles (1.3 km2), or 1.52%, is water. The town is bordered by the towns of North Salem and Lewisboro in Westchester County, New York to the west, Danbury to the north, Wilton to the south and Redding to the east.

Ridgefield consists of hilly, rocky terrain, ranging from 1,060 feet (320 m) above sea level (at Pine Mountain) to 342 feet (104 m) at Branchville. Its average village elevation is 725 feet (221 m) above sea level. The landscape is strewn with countless rocks deposited by glaciers, and among the town's bodies of water is Round Pond, formed in a kettle left by the last glacier 20,000 years ago. A particularly interesting feature is Cameron's Line, named for Eugene N. Cameron, who discovered that rocks west of the line differed greatly from those east of it. This fault line was formed some 250 million years ago by the collision of "Proto North America" and "Proto Africa", and there are still occasional light earthquakes felt along its length. The line bisects the southern half of the town, running generally north of West Lane, across the north end of the village, past the south end of Great Swamp and generally easterly into Redding in the Topstone area. North of Cameron's Line, the town is rich in limestone. The mineral was extensively mined, and remnants of several limekilns exist today. Also mined here in the 19th century was mica, pegmatite, and quartz. Gold, as well as gemstones such as garnet and beryl, have been found here, and dozens of minerals have been unearthed at the old Branchville Mica Quarry. Uraninite, a source of uranium, is found here, too.

There were 8,433 households, out of which 43.0% had children under the age of 18 living with them, 70.6% were married couples living together, 6.0% had a female householder with no husband present, and 21.6% were non-families. 18.9% of all households were made up of individuals, and 7.5% had someone living alone who was 65 years of age or older. The average household size was 2.78 and the average family size was 3.21.

The Ridgefield Symphony Orchestra began as the "Ridgefield Symphonette" in 1965 with 20 players, only a third of them professionals. It became fully professional by the end of the decade and today has 75 musicians and draws soloists of international reputation. In 1984, Maxim Shostakovich, then a Ridgefielder, conducted a sold-out concert of music by his father, Dmitri Shostakovich, with the composer's grandson, Dmitri, performing as piano soloist.

The Keeler Tavern Museum preserves an early 18th-century house that, by the time of the Revolution, had become a tavern and inn. The tavern was a center of community activities, an early post office, and a stop on the northern New York to Boston post road. In the early 20th century, it was the home of noted architect Cass Gilbert. The tavern is open several days a week, offers tours, and has a gift shop.

The Aldrich Contemporary Art Museum is a leading venue for the world's best contemporary artists. Its exhibitions have attracted national attention and respect. The museum was redesigned and expanded in 2004, and offers many special programs, including concerts.

The Ridgefield Playhouse, opened in December 2000, is housed in the former Ridgefield Alternate High School auditorium, and was remodeled as a playhouse. It is the year-round venue for dozens of concerts and other performances, many by internationally known artists. The Playhouse also shows movies, many of them first-run.

Weir Farm National Historic Site, which straddles the Ridgefield-Wilton border, preserves much of the farm of J. Alden Weir (1852–1919), a painter of the American Impressionism style. The property was later used by his son-in-law, Mahonri Young (1877–1957), noted sculptor and a grandson of Brigham Young. The site includes the Weir Farm Art Center and a gallery, and many special events take place there, including shows by visiting artists in residence. Weir Farm is one of only two official National Park Service units in the state. 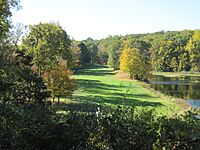 Located at the intersection of West Lane and Route 35, the Peter Parley Schoolhouse (c. 1750), also known as the Little Red Schoolhouse or the West Lane Schoolhouse, is a one-room schoolhouse in use by the town until 1913. The site and grounds are maintained by the Ridgefield Garden Club. The building is open certain Sundays and displays the desks, slates and books the children used.

Ridgefield Golf Course is the town's municipal 18 hole golf course designed by George Fazio and Tom Fazio and opened in 1974.

The town's largest industry is Boehringer Ingelheim Pharmaceuticals, whose United States headquarters are located in the Ridgebury section of town.

The town also features a skatepark, owned by the town and maintained by the town's parks and recreations service, in which both skateboarding and aggressive inline skating are done. In 2010 the skatepark was rebuilt and expanded as a result of the need to expand the Ridgefield Playhouse parking lot.

The 1939 film In Name Only, starring Cary Grant, Carole Lombard and Kay Francis, is partially set in Ridgefield, and the opening shot is of the wooden sign at the corner of Main St. and Branchville Road opposite what is now Jesse Lee Memorial United Methodist Church.

In the 1941 film The Lady Eve, starring Henry Fonda and Barbara Stanwick, Fonda's character hosts lavish parties in a fictional town called Bridgefield, Connecticut, a town full of millionaires, right outside of New York. This fictional town is based on the town of Ridgefield.

Ridgefield Academy is a co-educational, independent school serving preschool through eighth grade, situated on a 42-acre (17 ha) turn-of-the-20th-century estate on West Mountain that was once home to the Congregation de Notre Dame.

There are also various preschools and a Montessori school.

For more details, see List of people from Ridgefield, Connecticut

Ridgefield has been associated with many people in different fields. A brief summary includes actor Robert Vaughn and actor/playwright Harvey Fierstein, who lives in town. Authors have included Eugene O'Neill, Howard Fast, Cornelius Ryan, Richard Scarry, and Maurice Sendak. In August 2016, the Maurice Sendak Memorial Highway was dedicated in honor of Sendak on Route 35 in town from the intersection of Limestone Road to the intersection of Route 7. Ridgefield is home to American portrait artist John Howard Sanden. Cartoonist Roz Chast, a frequent New Yorker magazine contributor, lives in town, as does singer Judy Collins. Conductor Maxim Shostakovich once lived in town, as did Time magazine owner Henry Luce and his wife, Clare Boothe Luce, who was also a playwright and Congresswoman, and comedian Chris Elliott. A notable metropolitan opera singer from the early 20th century, Geraldine Farrar, lived in a house on West Lane.

Kurt Waldheim, the former secretary-general of the United Nations, rested in town at the estate of a friend, and Theodore Sorensen, former advisor to President John F. Kennedy, was once a town resident. Ira Joe Fisher, a poet who is also a weatherman on CBS television, lives in town, as does veteran newsman Morton Dean and author and journalist Todd Brewster. Curt Onalfo, former head coach of the Kansas City Wizards, D.C. United and LA Galaxy, went to Ridgefield High School.

Silvio Bedini (1917–2007), a noted historian of American science, was born in Ridgefield and wrote the definitive history of Ridgefield, Ridgefield in Review (1958).

Theo Brunner was born in Palo Alto, California, and raised in Ridgefield, where he played volleyball for the high school team. The athlete continued honing his skills for the UC Santa Barbara Guachos team (2004-2008). Brunner then became a member of the United States men's national A2 beach volleyball team.

All content from Kiddle encyclopedia articles (including the article images and facts) can be freely used under Attribution-ShareAlike license, unless stated otherwise. Cite this article:
Ridgefield, Connecticut Facts for Kids. Kiddle Encyclopedia.