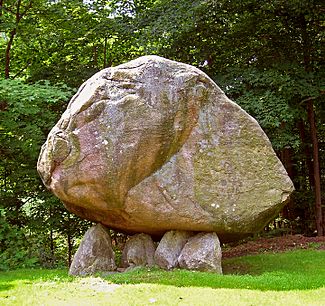 North Salem is a town in the northeast part of Westchester County, New York, United States. It is a suburb of New York City located approximately 50 miles north of Midtown Manhattan. The county ranks second for wealthiest counties in New York State and the seventh wealthiest county nationally. The population of North Salem was 5,104 at the 2010 census.

The Union Hall was added to the National Register of Historic Places in 1986.

Communities and locations in North Salem

All content from Kiddle encyclopedia articles (including the article images and facts) can be freely used under Attribution-ShareAlike license, unless stated otherwise. Cite this article:
North Salem, New York Facts for Kids. Kiddle Encyclopedia.