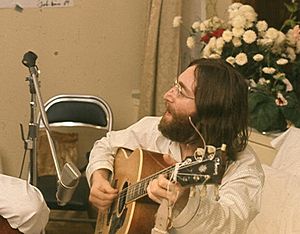 A protest song is a song that is part of a movement to change society. Many protest songs have lyrics that directly call for change, while others use humor, irony, or storytelling to make their point. Protest songs can come from just about any type of music. In the 1960s in the United States, many folk musicians like Phil Ochs, Joan Baez and Bob Dylan made protest songs. Some of these songs were against the United States fighting in the Vietnam War.

All content from Kiddle encyclopedia articles (including the article images and facts) can be freely used under Attribution-ShareAlike license, unless stated otherwise. Cite this article:
Protest song Facts for Kids. Kiddle Encyclopedia.