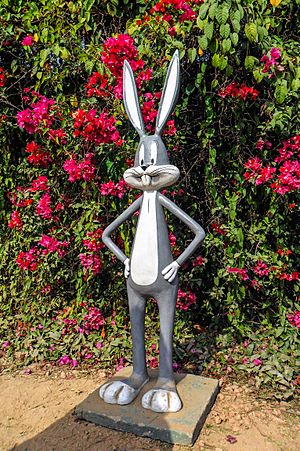 Bugs Bunny is an Academy Award-winning animated gray rabbit who starred in the Looney Tunes and Merrie Melodies series created by Warner Bros. He made the phrase "What's up, Doc?" popular as early as 1940. Other things he says are "I knew I shoulda taken that left turn at Albuquerque", "Of course you realize, this means war", and "Ain't I a stinker?". He is often seen as a very studious character, with a carrot in his mouth. His counterpart is commonly Daffy Duck, with whom he is usually arguing. In other shorts, he comes up against Wile E. Coyote, Elmer Fudd, or Yosemite Sam. Bugs speaks with a Brooklyn accent (and usually a mouthful of carrots), causing him to drop his "Rs". Bugs is somewhat based on the comedian Groucho Marx. Bugs is one of a dozen cartoon characters to have a star on the Hollywood Walk of Fame; he was the second after Mickey Mouse.

All content from Kiddle encyclopedia articles (including the article images and facts) can be freely used under Attribution-ShareAlike license, unless stated otherwise. Cite this article:
Bugs Bunny Facts for Kids. Kiddle Encyclopedia.