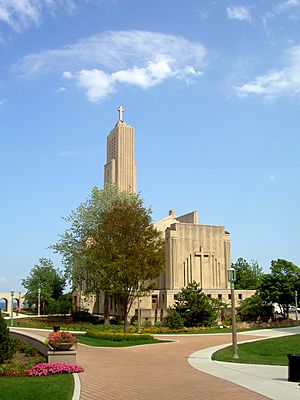 The Madonna della Strada Chapel which is on the campus.

Loyola University Chicago is a private, Jesuit university in Chicago, Illinois. The university has about 15,951 students. It was founded in 1870. The current president of the university is Michael J. Garanzini, S.J. .

The athletics teams of the university are called the Ramblers. They have 13 varsity teams, most of which compete in the Missouri Valley Conference. The men's volleyball team is a member of the Midwestern Intercollegiate Volleyball Association.

All content from Kiddle encyclopedia articles (including the article images and facts) can be freely used under Attribution-ShareAlike license, unless stated otherwise. Cite this article:
Loyola University Chicago Facts for Kids. Kiddle Encyclopedia.