Harvard is a city located in McHenry County, Illinois, approximately 7 miles (11 km) south of the Illinois/Wisconsin border. The population was 9,447 at the 2010 census. The city is 63 miles (101 km) from the Chicago Loop, and it is the last stop on the Union Pacific/Northwest Line. 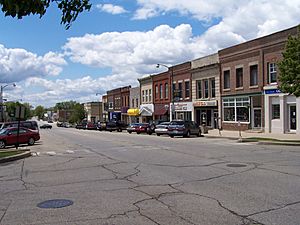 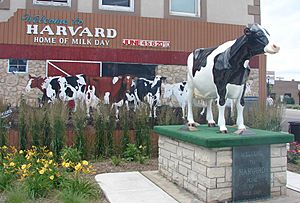 The original owners of the land which came to be Harvard, Illinois, were Abram Carmack and Jacob Davis, who obtained it from the government in 1845 and sold it to Gilbert Brainard shortly afterward. Upon Gilbert Brainard's death, the land was purchased by Amos Page, Otis Eastman, and Eldridge G. Ayer. These three men planned the layout of the town and named it "Harvard" in honor of Harvard, Massachusetts. The plat was signed by Judge J. M. Strode in Woodstock, Illinois, on November 25, 1856. Shortly afterward Amos Page and Otis Eastman sold their shares of the property to Eldridge G. Ayers. Mr.Ayers's involvement came out of his business interest in the extension of the Chicago and North Western Transportation Company railroad west from Cary, toward Janesville, Wisconsin. The newly platted town of Harvard was located directly on the route of the extension, and in April 1856 the railroad accepted Ayers's offer of land to build a station in the town.

In 1856 Mr. Wesley Diggins built a hotel for Mr. H. C. Blackman, who sold it to Mr. Ayer in 1859. Mr. Ayer built additional floors to raise it to a height of three stories and added a wing and a veranda. During the Civil War, sick and wounded soldiers passing through Harvard were lodged at the hotel with no charge for their meals. In 1925 the Ayer Hotel was purchased by Mr. S. J. Noble and renamed the Noble Hotel. When he could not maintain mortgage payments it was purchased in 1937 by Mr. P. G. Allen and renamed the Hub Hotel. The building was destroyed in a fire on December 22, 1960.

As railroad employment expanded, Harvard's population grew. On April 18, 1869, voters incorporated the community and elected Ayer as the first village president. The first ordinance adopted required every able-bodied citizen between the ages of 18 and 60 to perform one day of labor for the town.

Motorola opened a 1,500,000 square feet (140,000 m2) mobile telephone manufacturing and distribution facility on Harvard's north side in 1997. The plant employed more than 5,000 at its peak. However, a combination of factors, including a significant decline in Motorola's business in the early 2000s, compelled the company to shutter the facility in 2003. In 2012, the 1.5 million square foot facility was sold to Optima Ventures, a Miami-based real estate investment firm led by Chaim Schochet and 2/3rd owned by the Privat Group, one of Ukraine's largest business and banking groups.

In 2006, Harvard held a year-long Sesquicentennial Celebration. The Greater Harvard Area Historical Society is located on Hart Street. The society identifies and marks historical sites in the area. It also works to obtain histories of Harvard families, businesses, and farms which have been in operation for more than 100 years. 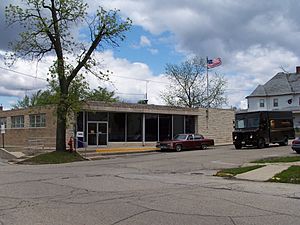 The U.S. Post Office is located on Harvard's North Eastman Street. The current building was constructed during the Kennedy Administration in 1962 when J. Edward Day was the Postmaster General.

Harvard's Fire Protection District consists of 47 trained firefighters, of which 22 are Emergency medical technicians and 14 are paramedics. The district traces its history to 1865 when five men got together to purchase a fire engine for the village of Harvard. In 1871, the engine was sent to Chicago via the railroad to assist in the Great Chicago Fire. In 1892, it was again placed on a train to assist with a fire in the community of Kenosha, Wisconsin. In 1899, the first constitution and by-laws were drawn up for the Harvard Fire Department. The Harvard Rescue Squad was founded in 1956 with a $7000 donation from the Harvard Jaycees. In 1971, the City and Rural Fire Department merged to form the Harvard Fire Protection District.

Currently, the Harvard Fire Protection District is governed by a three-member board of trustees appointed by the McHenry County Board. While the Fire District works very closely with the city of Harvard, it is a separate government agency. The district provides fire and emergency medical service for 108 square miles (280 km2) and is funded by ambulance user fees and property taxes. It is part of the Rock River Region EMS System, which is affiliated with Rockford Memorial Hospital, a Level I trauma hospital. The district also has a SCUBA dive team, trained for water rescue. This team is part of the McHenry County MABAS 5 Dive Team.

U.S. Route 14, locally known as the Northwest Highway and Division Street, runs north-south through Harvard. Illinois Route 23 begins in southern Harvard and connects the city with other locations to the south. Illinois Route 173 also runs east-west through Harvard, and it connects many other towns along the Wisconsin border to Harvard. The nearest Interstate Highway to Harvard is Interstate 90 in Belvidere; Interstate 39 in Machesney Park is also nearby, as is Interstate 43 in Wisconsin.

Harvard is also served by multiple forms of public transportation. Pace operates Route 808 in Harvard. This route links the city to the communities of Woodstock and Crystal Lake. Metra's Union Pacific/Northwest Line has a station in Harvard and operates daily service to Chicago's Ogilvie Transportation Center. The Harvard station is the most remote point in the Metra system at 62.8 miles (101.1 km) from downtown Chicago.

All content from Kiddle encyclopedia articles (including the article images and facts) can be freely used under Attribution-ShareAlike license, unless stated otherwise. Cite this article:
Harvard, Illinois Facts for Kids. Kiddle Encyclopedia.