His directorial film work includes Mission: Impossible III (2006), Star Trek (2009) and its sequel Star Trek Into Darkness (2013), and Super 8 (2011). He also directed and co-wrote Star Wars: The Force Awakens (2015), the first film in the Star Wars sequel trilogy and his highest-grossing film, as well as the third highest-grossing film of all time. He will return to Star Wars by co-writing and directing Episode IX. 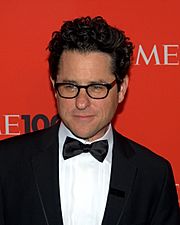 Abrams was born in New York City and raised in Los Angeles, the son of television producer Gerald W. Abrams (born 1939) and executive producer Carol Ann Abrams (née Kelvin; 1942–2012). His sister is screenwriter Tracy Rosen. He attended Palisades High School. After graduating high school, Abrams planned on going to dental school rather than an arts college, but eventually enrolled at Sarah Lawrence College, following his father's advice: "it's more important that you go off and learn what to make movies about than how to make movies." 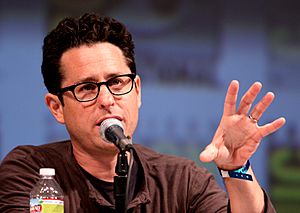 Abrams is married to public relations executive Katie McGrath and has three children. He resides in Pacific Palisades, Los Angeles, California. He is Jewish and his wife is Roman Catholic, and he sometimes takes his children to religious services on Jewish holidays.

Abrams serves on the Creative Council of Represent.Us, a nonpartisan anti-corruption organization.

All content from Kiddle encyclopedia articles (including the article images and facts) can be freely used under Attribution-ShareAlike license, unless stated otherwise. Cite this article:
J. J. Abrams Facts for Kids. Kiddle Encyclopedia.