Spider-Man is a fictional superhero in the Marvel Comics universe. He is a character created by writer Stan "the man" Lee and artist Steve Ditko. He first appeared in Amazing Fantasy #15 in August 1962. The premise was that he was an orphan being raised by his Aunt May and Uncle Ben as an ordinary teenager. He would deal with the normal struggles of being young as well as the struggles of being of a costumed crime fighter. His powers were super strength, agility, the ability to cling to almost every surface, the ability to shoot spider-webs using an device that he invented which he calls "web-shooters," and reacting to danger quickly with his "spider-sense", enabling him to combat many foes similar to that of a spider.

Spider-Man first appeared in the early 1960s, when teenagers in superhero comic books were usually relegated to the role of sidekick to the protagonist. The series featured Peter Parker, a high school student who frequently suffered the same rejection, inadequacy, and loneliness, that most young readers could easily relate to. Unlike some teen heroes, such as Bucky and Robin, Spider-Man never had any adult mentors like Captain America and Batman to teach him to be an superhero. He had to learn for himself that "with great power comes great responsibility" — a quote that he would cherish from his late Uncle Ben.

Marvel has featured Spider-Man in several comic book series such as The Amazing Spider-Man, Spectacular Spider-Man and Sensational Spider-Man over the years. Peter Parker has developed from shy high school student to troubled but outgoing college student to married high school teacher. But his most associated adult role is that of being a single freelance photographer. He has also been a member of both the New Avengers, and the Fantastic Four. Spider-Man has had a lot of nicknames over the years such as being referred to as "Spidey," "web-slinger," "wall-crawler," or "web-head." He is also called "arachnid" by some villains and calls himself "Your Friendly Neighborhood Spider-Man."

Spider-Man has been one of the most popular and commercially successful superheroes. Often considered to be Marvel's flagship character and company mascot, he has appeared in many forms of media such as animation and movies.

The first time that Spider-Man (who is also known as) Peter Parker appeared was in the Amazing Fantasy #15 comic book in August 1962. Because of its success, a new comic book series began called The Amazing Spider-Man. Others were created including Spectacular Spider-Man, Sensational Spider-Man and Ultimate Spider-Man.

Spider-Man wears a red and blue super suit. This has a webbing design on the red parts of the suit which are the mask, torso, boots and gloves. The leggings and sleeves and sleeves are blue. 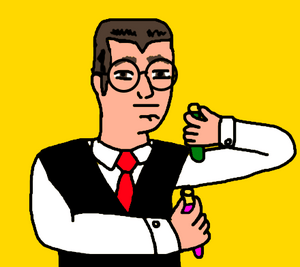 In Peter Parker's first appearance, he is introduced as an orphaned science whiz teenager living with his aunt and uncle in the Forest Hills section of New York City. He is a brilliant student but also gets picked on by his peers who accuse him of being a bookworm, and constantly gets bullied by Eugene "Flash" Thompson, who calls him "Puny Parker" and humiliate him daily. One day, he is bitten by a radioactive spider which then gives him his powers that turn him to Spider-Man.

As Spider-Man, he then becomes a successful TV star. The career then goes to his head that one day at a studio he refuses to stop a thief, saying that it is the job of the police, not that of a star. He then returns home to learn that his beloved Uncle Ben, has been murdered and as Spider-Man he angrily sets off to capture the killer. When he does, he is horrified to find that the man is none other than the Burglar he refused to subdue. Learning that with great power comes great responsibility, Spider-Man becomes a vigilante. After his uncle died, Peter and his aunt become desperate for money, so he gets a job as a photographer at the Daily Bugle selling photos to J. Jonah Jameson, who seems to be jealous of Spider-Man and makes Spider-Man look bad in the paper. As he battles many enemies for his first time, Parker finds it difficult juggling both his personal life and costumed adventures at the same time. In time, he would then graduate from high school, and enroll at Empire State University, where he meets roommate and best friend Harry Osborn and his second girlfriend (having been romantically involved with Betty Brant before) Gwen Stacy, Peter also discovers his best friend Harry has a drug problem and that Harry's father is revealed to be one of Spider-Man's nemesis the Green Goblin, Peter then attempts to give up his costumed identity. In the course of his adventures though Spider-Man has made quite a few of friends and contacts within the superhero community, who often come to his aid when he faces problems that he cannot solve on his own.

His loved ones are frequently endangered by enemies which turns out to be an alien symbiote. After noticing the symbiote's true nature Peter then rejects the symbiote after a difficult struggle. In a controversial storyline, Peter becomes convinced that Ben Reilly, the Scarlet Spider who is actually a clone of Peter created by his college professor Miles Warren is the real Peter Parker, and that he, Peter, is actually the clone. Peter gives up the Spider-Man identity to Reilly for a while until Reilly is killed by the returning Green Goblin and revealed to be the clone after all. He for a little bit develops additional spider-like abilities including biological web-shooters, toxic stingers that extend from his forearms, the ability to stick individuals to his back, enhanced Spider-sense and night vision, and increased strength and speed. He even becomes a member of the New Avengers, and reveals his civilian identity to the world, which causes more problems such as Aunt May being shot. Due to his Aunt May almost dying, his marriage to Mary Jane and public unmasking are later erased due to a deal made with the demon Mephisto, resulting in several adjustments to the time line, such as the resurrection of Harry Osborn and Spider-Man original powers. After months of just Peter knowing Spider-Man's identity he then unmasks himself to the New Avengers and the Fantastic Four.

Spider-Man is one of the most well known superheroes ever created. He is normally considered to Marvel Comics' flagship character. His quote With great power comes great responsibility is one of the most popular superhero quotes ever used. He has also been adopted in other media such as television and video games and most popularly Sam Raimi's film trilogy which includes Spider-Man, Spider-Man 2, and Spider-Man 3. The Amazing Spider-Man movies are also popular.

Supporting characters in the Spider-Man series include:

Villains in the Spider man series include:

All content from Kiddle encyclopedia articles (including the article images and facts) can be freely used under Attribution-ShareAlike license, unless stated otherwise. Cite this article:
Spider-Man Facts for Kids. Kiddle Encyclopedia.