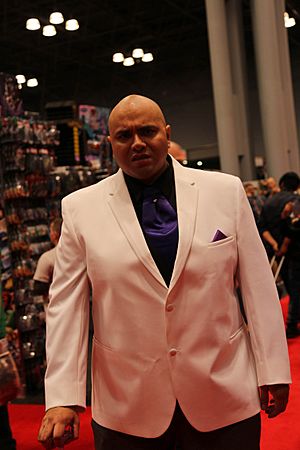 The Kingpin (Wilson Fisk) is a fictional character in the Marvel Universe. The character first appears in The Amazing Spider-Man #50 (July 1967), and was created by writer Stan Lee and artist John Romita, Sr. The Kingpin often appears as an adversary of Spider-Man, Daredevil and the Punisher.

Kingpin is the main antagonist of both the 2003 movie Daredevil played by Michael Clarke Duncan and the 2015 Netflix original television series Daredevil set in the Marvel Cinematic Universe in which he is played by Vincent D'Onofrio. Kingpin is also the villain of the animated movie Spider-Man: Into the Spider-Verse.

All content from Kiddle encyclopedia articles (including the article images and facts) can be freely used under Attribution-ShareAlike license, unless stated otherwise. Cite this article:
Kingpin Facts for Kids. Kiddle Encyclopedia.