Previous to European settlers arriving, Native American Indians lived in the area now known as Portage, Indiana. The first known group was the Mound Builders. The only known mound existed in the village of McCool. This mound was removed by the owner, Mr. J.S. Robbins in the early 1900s. Following the Mound Builders, the Wea Tribe inhabited the area. The Wea were forced south of the area by the Potawatomi Tribe.

It is speculated that Marquette, Joliet, Hennepin or De la Croix was the first explorer, however it is unknown exactly who it was. Despite the Potawatomi being a warring tribe, Chief Pokagon encouraged diplomacy rather than war when European Settlers wanted to settle in the area. The Potawatomi tribe sold land to the settlers in 1812 known as Garyton which was one of the first communities in Portage Township.

By 1833, there were many European settlers in the area. Samuel Putnam Robbins was among the first. He came from Hocking County, Ohio, and settled near modern-day Robbins Road between McCool Road and Indiana Highway 149. In 1834, Joseph Wolf, who was married to a Blake settled in the area, squatted on land currently near the modern-day community of South Haven and operated several dairy and beef farms there. Other known early settlers include Berret Door, Reuben Hurlburt, Wilford Parrott, The Spurloch brothers, William McCool, Benjamin James, his son Allen James, William Holmes and Jacob Blake. Jacob Blake came to Portage in 1833.The following family names are also among the first settlers: Blake, Palmer, Summer, Ritter, Curtis, Peck, Hurl, Lenburg, Fifield, Crisman, Krieger, Nicholson, Samuelson, Swanson, Lute, Hamstrom, McCool,and Wolfe.

Before Portage became a town, it consisted primarily of three separate communities in addition to much farmland. They were named McCool, Crisman and Garyton. In 1950, those communities only had 2,116 residents. La Porte County maintained jurisdiction over Porter County in 1835, and founded Portage Township that year.

Portage Township was primarily a farming community until railroad development began in the 1850s and 1860s. The first railroad to build in the area was the Michigan Central, completed in 1852. The Michigan Central connected Detroit to Chicago. This enabled local farmers to easily ship livestock, dairy and crops to Chicago and any other stop along the way. It was a boon to the farmers of the area at the time and enabled them to buy more land for farming. The Michigan Central was later bought by the New York Central Railroad.

The next railroad to build through the Portage area was the Baltimore and Ohio in 1874. This railroad crossed the Michigan Central near the village of Crisman. Despite the apparent success of the early railroads, the area remained primarily agrarian and relied on the railroads to sustain its economy. Sand was also an industry in Portage due to demand in the growing city of Chicago. The railroads enabled sand to be delivered to Chicago more efficiently.

Between the 1870s and the depression era, Portage did not grow very much. It has been estimated that between 1880 and 1950, the growth rate averaged only about 64 people per year. This is despite the growth of towns to the west such as Gary, Hammond and East Chicago due to the industrialization of steel mills. Portage was not unaffected by the Great Depression. Due to the steel mills being in economic trouble, the farmers of Portage did not have demand to produce their products. As a result of this, the farmers had food, but no money. Many even lost their farms.

Like many communities in the country, World War I and World War II affected the economy of Portage in a big way. Steel mills geared into high production and labor was in high demand, thus drawing many people to the area.

After the war, the economy remained strong because of the high demand for automobiles and appliances, both of which the steel was produced at the steel mills. The population of post-war Portage grew very quickly. In the early 1950s, people came from Kentucky, southern Indiana and Illinois. Most were seeking the steady salary available in the steel mills and related industries.

National Steel opened a plant along the shore of Lake Michigan in Portage in 1959. This brought in about 1,600 new jobs. The Port of Indiana was also built in 1961 to accommodate trade with the world via Lake Michigan. In 1963, Bethlehem Steel began construction of a plant which was located partly in Portage. This project brought about 6,000 jobs to the area.

In 1959, Portage was incorporated as a town. Ogden Dunes and South Haven were excluded because the residents of these areas did not wish to be included in the town. Due to the surge of population after the war, many farmers were selling land to be subdivided into lots for families to build homes. In 1967, Portage officially became a city. During the 1950s and 1960s, the city of Gary was going through a time of racial strife. White people of Gary were seeking a way out of the turmoil, which drew many people to Portage during this time.

Portage is still a heavily industrial city. While primarily dependent on the Steel Industry, the 1980s brought a decline in the steel industry. As a result, C.O.I.L (the Community Organization on Industrial Location) was formed. This organization promotes diversified industry in the area. They have had part in developing the Coca-Cola bottling plant and further development of the Port of Indiana.

Very few farms are still active in the Portage area. However, many original descendants of founding families are still in the area.

Portage has seen many new green technology industries locate to the community since the early 2000s including Fronius USA. In 2016, the City opened a new Police Station and Fire Station in the downtown corridor. The new Police Station is triple the size of the former station on Irving Street.

There were 13,992 households of which 36.3% had children under the age of 18 living with them, 49.0% were married couples living together, 14.6% had a female householder with no husband present, 6.1% had a male householder with no wife present, and 30.3% were non-families. 24.3% of all households were made up of individuals and 9% had someone living alone who was 65 years of age or older. The average household size was 2.61 and the average family size was 3.10.

There were 12,746 households out of which 34.7% had children under the age of 18 living with them, 53.7% were married couples living together, 12.2% had a female householder with no husband present, and 29.3% were non-families. 23.9% of all households were made up of individuals and 9.1% had someone living alone who was 65 years of age or older. The average household size was 2.60 and the average family size was 3.09. 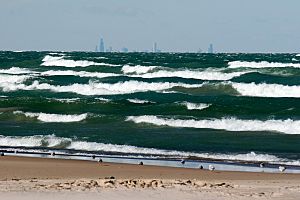 The Chicago skyline as viewed from the Portage Lake Michigan skyline.

Portage is also connected to Chicago, Illinois and South Bend, Indiana by the South Shore Line. Passengers can board the train at the Portage/Ogden Dunes Station, which is located immediately east of Ogden Dunes in Portage.

Also located on the shores of Lake Michigan is the Port of Indiana. 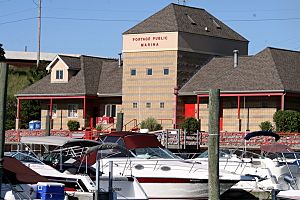 Portage Parks offer a wide variety of service, from sports leagues, to crafts, to hiking and water sports.

The Sammie L. Maletta Public Marina offers boat launch and slips for public use. The marina opens to the Burns Waterway and has access to nearby Lake Michigan. The marina's operating season is April 1 to October 31 each year. In 2016, the marina was named in honor of former Portage Mayor Sammie Maletta. Maletta was instrumental in securing funding and approval to build the marina in the early 1990s as Mayor.

Robbins Pond is located on Superior St. as well as Superior Avenue and Samuelson Road in Portage. The lake contains largemouth bass, bluegill, crappie, other panfish, and bullhead catfish, making it a popular fishing site. The lake is home to many turtles including snapping turtles . It also has a small drainage pond, which has most of the above-mentioned wildlife. The drainage pond links to Kevins Creek, which then runs to Salt Creek and out to Lake Michigan.

All content from Kiddle encyclopedia articles (including the article images and facts) can be freely used under Attribution-ShareAlike license, unless stated otherwise. Cite this article:
Portage, Indiana Facts for Kids. Kiddle Encyclopedia.