Chesterton is a town in Westchester, Jackson and Liberty townships in Porter County, in the U.S. state of Indiana. The population was 14,241 at the 2020 Census. The three towns of Chesterton, Burns Harbor, and Porter are known as the Duneland area.

Chesterton was originally called Calumet, and under the latter name was platted in 1852 when the railroad was extended to that point. Chesterton was incorporated as a town in 1899.

In 1933, a United Airlines NC13304 flight became the first known case of an attack against an aircraft. It was downed by a nitroglycerine bomb above Chesterton on October 10, 1933. All 7 people aboard the aircraft—four passengers and a crew of three—were killed in the crash.

In 1958, Evan Murrs created and patented the first electric bicycle powered by Lithium-Ion batteries in the shop class at Chesterton High School.

The Chesterton Commercial Historic District and the George Brown Mansion are listed on the National Register of Historic Places. 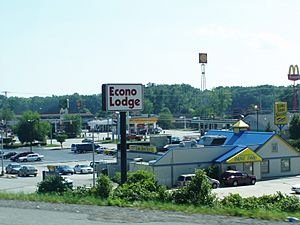 There were 5,029 households, of which 37.3% had children under the age of 18 living with them, 54.1% were married couples living together, 11.8% had a female householder with no husband present, 4.7% had a male householder with no wife present, and 29.3% were non-families. 23.3% of all households were made up of individuals, and 8.2% had someone living alone who was 65 years of age or older. The average household size was 2.58 and the average family size was 3.07.

Chesterton was home to the annual Wizard of Oz Festival, which is the largest and most famous of its kind. In 2006, former organizers Lakeshore Festivals and Events moved the event to the Porter County Expo Center in Valparaiso, Indiana. After 3 years, LFE discontinued the festival and it was brought home to Chesterton by the Duneland Business Initiative Group in 2009. The Duneland Business Initiative later rescinded their support of the festival in 2013.

The town has a lending library, the Westchester Public Library.

All content from Kiddle encyclopedia articles (including the article images and facts) can be freely used under Attribution-ShareAlike license, unless stated otherwise. Cite this article:
Chesterton, Indiana Facts for Kids. Kiddle Encyclopedia.