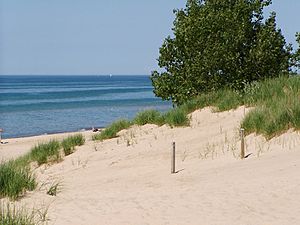 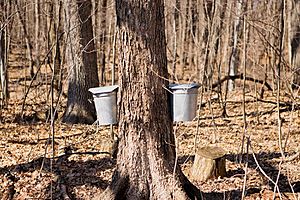 More than 3.5 million people visit a sandy, hilly area called Indiana Dunes each year. It sits along the shores of Lake Michigan, about 50 miles (80 km) southeast of Chicago. Visitors to the area swim and sail on the lake. They watch birds in the wetlands. They study plant life in the forests of oak and maple trees. Now, the 6,000-hectare site is the newest national park, and also 61st national park in the United States. It became Indiana Dunes National Park on February 15, 2019.

The park is one of the most ecologically mixed places in North America. Indiana Dunes has about 1,500 different kinds of plants.

The Dunes are also along a major migration path, and birdwatching is a big reason visitors come to Indiana Dunes each year. The area is home to more than 300 species of birds. The birds include waterbirds such as loons and herons, as well as birds of prey like bald eagles and hawks. Several species of songbirds also live there.

In winter season, people living near by or visitors enjoy collecting sap from maple trees in the park in order to make maple syrup. Sap is a liquid containing sugar inside the trees. People can get sap by making a small hole in a tree. Maple tree sap was historically collected by local American Indians, pioneers and early residents of a farm.

A Maple Sugar Time festival is held in March every year. visitors can learn how American Indians first boiled maple sap into sugar, and how early settlers used large iron kettles to make syrup. Pure maple syrup and sugar, and related products like maple-flavored popcorn and maple water, are for sale.

All content from Kiddle encyclopedia articles (including the article images and facts) can be freely used under Attribution-ShareAlike license, unless stated otherwise. Cite this article:
Indiana Dunes National Park Facts for Kids. Kiddle Encyclopedia.