The Chesterton Commercial Historic District is a historic district in Chesterton, Indiana.

Originally called Coffee Creek and located a little to the south of the current downtown, the name was changed some time after the post office was established in 1833 to Calumet, the river to the north. When the Lake Shore and Michigan Railroad came through the area in 1852, the town moved north to the current location and began to develop. The town's name was not changed to Chesterton until after the Civil War. There appears to have been confusion with Calumet, Illinois, further up the track.

The town's location along the railroad helped industry to grow. Soon, there was a cooperage, sawmills, a washing machine factory, and an organ company. Among the better examples of the towns growth are the commercial building on the southwest corner of Broadway and Calumet Rd, and the old Chesterton Tribune Building. 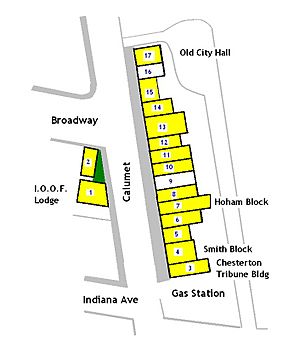 Based on map provided in the National Register of Historic Places Registration Application.

The bulk of the historic district in on the east side of Calumet Road. The southern end of the district starts across from Indiana Ave. It runs north to the tracks.

All content from Kiddle encyclopedia articles (including the article images and facts) can be freely used under Attribution-ShareAlike license, unless stated otherwise. Cite this article:
Chesterton Commercial Historic District Facts for Kids. Kiddle Encyclopedia.