Located in Chesterton, Indiana, the Chesterton Residential Historic District is located a block south of the business district, along Second Street from Indiana Ave. to Lincoln Ave. and on Indiana Ave. from Second to Third Streets. The area began with the Martin Young House construction about 1870. The Historic Landmarks Foundation of Indiana describes as one of the best Italianate structures remaining in northwest Indiana. Most of the structures date from the early twentieth century. St. Patrick's Catholic Church, built in 1876, and burned ca. 2000.

The historic district was established in December 2009 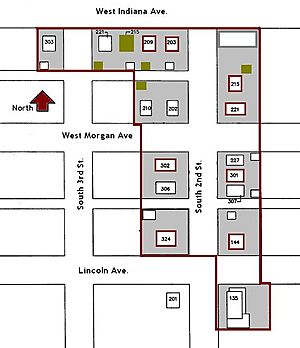 Chesterton Residential Historic District Map. based on map provided in the Nomination to the US Department of the Interior.

All content from Kiddle encyclopedia articles (including the article images and facts) can be freely used under Attribution-ShareAlike license, unless stated otherwise. Cite this article:
Chesterton Residential Historic District Facts for Kids. Kiddle Encyclopedia.