Valparaiso ( vahl-pə-RAY-zoh) is a city and the county seat of Porter County, Indiana, United States. The population was 31,730 at the 2010 census.

The site of present-day Valparaiso was included in the purchase of land from the Potawatomi people by the U.S. Government in October 1832. Chiqua's town or Chipuaw was located a mile east of the current Courthouse along the Sauk Trail. Chiqua's town existed from at or before 1830 until after 1832. The location is just north of the railroad crossing on State Route 2 and County Road 400 North.

Located on the ancient Naive American trail from Rock Island to Detroit, the town had its first log cabin in 1834. Established in 1836 as Portersville, county seat of Porter County, it was renamed to Valparaiso (meaning "Vale of Paradise" in Old Spanish) in 1837 after Valparaíso, Chile, near which the county's namesake David Porter battled in the Battle of Valparaiso during the War of 1812. The city was once called the "City of Churches" due to the large number of churches located here at the end of the 19th Century.

The city also has a long history of being a transportation hub for the region. In 1858, the Pittsburgh, Fort Wayne and Chicago Railroad reached Valparaiso, connecting the city directly to Chicago. By 1910, an interurban railway connected the city to Gary, Indiana. Today, while the city no longer has a passenger train station, it is still very much a part of the "Crossroads of America" due to its proximity to I-65, I-80, I-90, and I-94. Additionally, the Canadian National railroad still runs through the downtown area.

Until 1991, it was the terminal of Amtrak's Calumet commuter service.

The city is situated on the Valparaiso Moraine.

Glaciation has left numerous features on the landscape here. Kettle lakes and knobs make up much of this hilly area of Northwest Indiana. The Pines Ski Area is the only remaining kame in the city; the other one is under the university's Chapel of the Resurrection, however, grading of land in that area makes that particular kame almost nonexistent. Many glacial erratics can be found throughout the city. The moraine has left the city with mostly clay soil.

There were 12,610 households of which 28.7% had children under the age of 18 living with them, 41.6% were married couples living together, 10.9% had a female householder with no husband present, 3.9% had a male householder with no wife present, and 43.6% were non-families. 34.5% of all households were made up of individuals and 11.3% had someone living alone who was 65 years of age or older. The average household size was 2.28 and the average family size was 2.99.

There were 10,867 households out of which 28.8% had children under the age of 18 living with them, 45.9% were married couples living together, 9.7% had a female householder with no husband present, and 41.4% were non-families. 33.4% of all households were made up of individuals and 10.9% had someone living alone who was 65 years of age or older. The average household size was 2.27 and the average family size was 2.93.

Valparaiso has an extensive city park district. In 2005 there were currently thirteen parks with another in the planning stages. 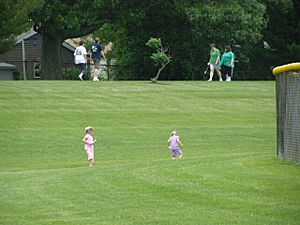 Fairground Park and the walking circuit

200 East (East McCord Rd) – a community park with a playground; where many of the cities legendary athletes played football as youngsters. Football at 200 East Park is a staple for young kids growing up in the neighborhood.

Bicentennial Park (Burlington Beach Road & Campbell St) – Provides a full range of activities, including a playground, tennis courts, basketball courts, ball diamond and picnic shelters. A prairie restoration is under way in the north half of the park.
Central Park Plaza (Lincolnway and Lafayette St) – is the centerpiece of the Downtown Valparaiso revitalization and opened the summer of 2011. It has an outdoor amphitheater for concerts and other special events as well as a splash pad in the center of the park for kids to play.
Fairgrounds Park (Calumet & Evans Avenues) – Has the largest complex of ball diamonds and soccer fields in the city. A playground and basketball court are available. Numerous city sports leagues use Fairgrounds Park for their games and tournaments. The park is surrounded by a paved walking circuit that is well occupied on nice days.
Foundation Meadows (Campbell Street & Bullseye Lake Rd) – One of the city's newer parks.
Glenrose South (1500 Roosevelt Road) – Provides several ball diamonds and when school is out, Thomas Jefferson Middle Schools track is available for those interested in walking. Glenrose South has been the home of the Valparaiso 4 July Fireworks display and celebration since 2005.
Jessee-Pifer Park (Elmhurst & Madison Streets) – a community park with a basketball court and picnic shelter.
Kirchhoff Miller Woods, (Roosevelt Road & Institute St – a community park that provides for basketball, baseball, tennis, picnicking and a playground. 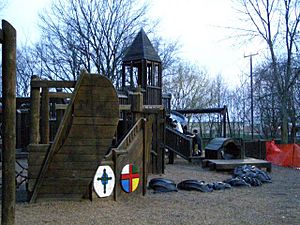 Ogden Gardens/Forest Park (Campbell Street and Harrison Blvd) – Ogden Gardens is the home of the city's botanical garden. The Campbell Street end is a formal garden with a variety of planting that bloom throughout the year. The Gazebo is a favorite place for weddings, wedding pictures and high school prom pictures. A Japanese garden is included with a 22,000-gallon Koi pond. Forest Park is to the west with an open grassy picnic area below a wooded picnic area with a shelter.

Rogers-Lakewood Park (Meridian Road (N Campbell Street)) – Provide opportunities for swimming, fishing, and hiking trails. It is connected to the north side communities of Valparaiso by the Campbell Street Bike Trail (hiking and biking).
Tower Park (Evans Ave and Franklin St.) is a community park that offers basketball, baseball, tennis, picnicking and a playground. During winter months, one of the basketball courts is turned into the community skating rink.
Valplayso/Glenrose North (Glendale Blvd and Roosevelt Rd) is the home of Valplayso, a community-designed and community-built playground. At the other end of the parking lot are several ball fields. Separated from Glenrose South by only the Middle Schools track, Glenrose North hosts over half of the community during the Fourth of July Celebration.
West Side Park (Joliet Rd) is a community park with a ball field and a playground.
Will Park (Morgan Blvd and Brown St) is a community park with a basketball court, playground, and picnic shelter.

Bike trails Valparaiso is building a series of bike trails across the city. Currently, most of the identified bike routes are part of the county's system of recommended roads and streets.

At Glendale, the Campbell Street Bikeway connects to the Glendale cross town bike lane. These travel east 2 miles (3.2 km) on Glendale, ending on North Calumet at the Walgreens corner.

The city holds two major festivals every year: the Popcorn Festival and the Porter County Fair. The Popcorn Festival is held on the first Saturday after Labor Day. It honors Orville Redenbacher, a former resident who built a popcorn factory there. Redenbacher participated in most of the festival's parades until his death in 1995. The festival also features racing events and a balloon launch in addition to typical fair activities. The Porter County Fair consists of carnival attractions and hosts a variety of shows such as a demolition derby, motocross races, and live musical performances.

Buildings and districts on the NRHP

All content from Kiddle encyclopedia articles (including the article images and facts) can be freely used under Attribution-ShareAlike license, unless stated otherwise. Cite this article:
Valparaiso, Indiana Facts for Kids. Kiddle Encyclopedia.